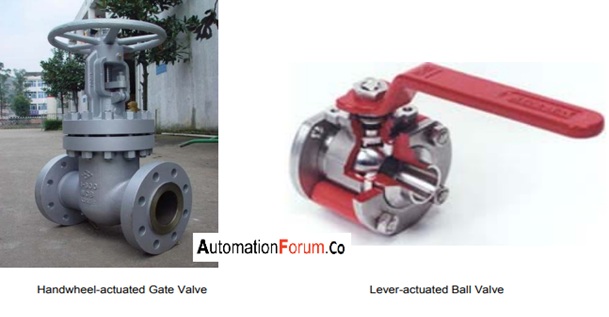 What is an actuator and what are their functions

The actuator is the major part of the control valve, this device operates the valve. The actuator would operate according to the received signal, it will move the valve to a certain position with the help of an outside power source. So basically actuator is a part of the valve that controls the valve position. The actuator helps in positioning the movable parts of the control valve. The actuator can locate the valve plug and it is the major purpose of an actuator. Certain functions of actuators are, moving the valve ball and plug to the desired position, it must hold its position, in case of forces due to the flow stream, the movement of the parts must be done at the desired speed, by applying proper force it must close the flow by applying proper force.
The operation of the valve could be
• Manual – completely operated by a person
• Semi-automatic – operated by a source of power which is switched on by a person
• Automatic – Operated by another source of power that is switched on by a signal from a sensing device.

How to select an actuator

What is the purpose of an actuator

What are the parts of an actuator

What is a valve actuator

In order to operate a control valve, its movable part must be positioned relative to the stationary seat of the valve. In order to do that we need to use an actuator, the actuator would locate the valve plug with the help of a control signal. The control system would provide the control signal, and according to that, it would move the valve either to a fully opened or fully closed position. Certain methods are used to control actuators they are, pneumatic, hydraulic, and electrical.

How actuators are classified

Performance characteristics of the linear actuator can be determined by the load capacity, actuator force or seating thrust, actuation time, and valve stem stroke length.

Actuation time is the time taken by the actuator to fully close the linear motion valve. The actuator force is the force needed to beat the system pressure and close the valve and to keep it closed.

In a rotary actuator, the starting torque is the torque needed to move a load from the rest. Running torque is the torque available at any given speed. In order to bring a running actuator to rest stall torque must be applied by the load. Rotary actuators are used to operate valves with rotary closure members such as a rotary plug, valves, ball valves, butterfly valves.

What are the types of actuators

In this type of actuator, it uses the levers or wheels to achieve the movement. The hand-wheel is used for linear motion valves such as gate and globe valves. The lever is used for rotational motion valves like ball and butterfly valves. Hammer hand-wheels can be seen for some larger hand-wheel operated valves, these will turn freely on the spindle for part of a turn. The gear system is used in bigger valves so that the actuating torque can be increased.

In an electric actuator, there would be a motor drive and it would give the torque that is required to operate a valve. These actuators are mostly used in multi-turn valves such as the globe or gate valve. The motor would turn the valve stem through a gear stem. In order to open and close the valve, the motor can be reversed. These valves are capable to control the flow but motor actuators are mostly used for fully open or close the valve.

If an electric current is passed through a coil of wire then the coil would act as a magnet, so with its magnetic property, it can attract certain metals. The solenoid actuators make use of this idea. The magnetic field will pull the armature into the coil when the current is switched on. These valves use the motion to operate the valve. The motion is linear so these valves operate directly on the valve stem to open and close it. These valves are mostly used in linear motion valves. These valves will be pushed by the spring in one direction. In case of the power failure then the valve will be operated by the spring. If the current is switched on then the solenoid will move the valve in another direction.

These actuators are similar to pneumatic actuators they use the fluids to move a piston. Hydraulic valves are operated in one direction. The valve is operated in one direction because of the hydraulic fluid pumped to one side of the piston. If the valve is operated by the spring in another direction then it would fail open or fail close, according to the way that the spring operates the valve. Some hydraulic actuators use double-acting cylinders that operate by pumping oil to either side of the piston. The valve will open if the pumping is done in one direction and it will close if the pumping is done in the other direction.

In this type of actuator, high force is provided by an air piston, and it also has a better power to weight ratio. These actuators have less moving parts so less maintenance would be needed. The dynamic response of these actuators is very good, piston actuators are capable to handle high differential pressure and has better shutoff capability. These types of actuators are mostly used if the stroke of a diaphragm actuator is too short or the thrust is too small.

What are the features of actuators

The response time in the pneumatic actuator can be defined as the dead time is long and action speed is fast. In case of power failure, it would maintain a safe position by using an integrated spring or connecting volume tank easily. Output power is high for piston-cylinder type, and the average for diaphragm type. Low maintenance and less cost.

The response time of the hydraulic actuator can be defined as the dead time is short and action speed is fast. It is difficult to maintain a safe position during a power failure. Output power is small for integrated type and high for oil separated type. Maintenance is needed and expensive too.

What is a pressure control valve and how does it work