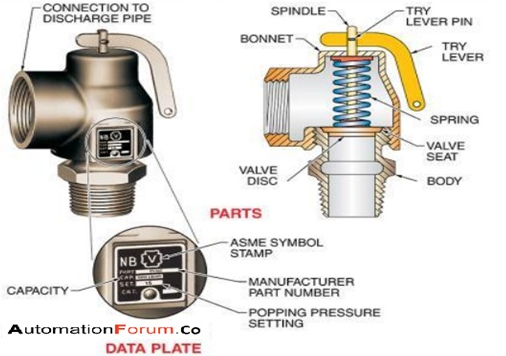 A safety valve can be considered as a pressure reducing or pressure removing device. When there is any excessive internal fluid pressure then this valve would open so that the damage in the system can be prevented. These valves are commonly used in gas and steam lines. In an unprotected pressure vessel or a system if the pressure level exceeds the safe pressure level, then there could be catastrophic effects on both plant and personnel. The major purpose of a safety relief valve is to protect any pressurized system from the effects of exceeding its design pressure limit. These valves are designed to automatically discharge gas pressure or liquid from any pressure-containing system and thus it prevents excessive pressure and protects plants and personnel. In order to fulfill all this, a safety valve should be properly sized, selected, installed, and maintained.

What are the characteristics of the safety valve?

What is the difference between the safety valve and the relief valve?

How to select a safety valve

What is a safety relief valve

What is safety valve gagging

Gagging is the process of arresting the stem mechanically from lifting. Gagging must not be done in cold conditions.

What are the components of a pressure safety valve

Cap –it is the top part of the safety valve, which covers the adjustment screw this could be threaded or bolted to the bonnet.

Bonnet – it is the middle part of the valve and it houses the stem, spring, spring buttons, and guide plate. This device could be open or closed type.

Body – it is the bottom-most portion and it encloses disc holder, disc, nozzle blow-down ring, and locking nut.

Disc and disc holder – Disc is the device that would be affected by process pressure and they are vulnerable to galling, erosion, and pitting

The internal components of safety valves such as spindle or guides which is the moving part must be constructed by using materials that will not easily corrode. The seats and discs must be able to resist corrosion, so stainless steel is used for their construction. Sometimes nozzle discs are constructed by using special alloys such as Hastelloy or monel.

How does a safety relief valve work

If the pressure rises above the set pressure in a system, the disc will begin to lift off its seat. The spring will start to compress and the spring force also increases. So the lift will happen only if the pressure is increased again and after that, the flow through the valve occurs. Overpressure is the additional pressure rise needed before the safety valve will discharge at its rated capacity. Overpressure is dependent upon the set pressure and the standard for the particular application. The disc in the safety valve is arranged in a way that a slight increase in pressure than the set pressure could cause the valve to open. When the pressure reaches a safe level in the system the valve would return to its closed position. The disc is arranged for rapid opening in order to achieve this most safety valves have a secondary chamber formed by a shroud, skirt, or hood around the outside diameter of the disc.

What are the types of safety valves

A pilot-operated safety valve is a pressure relief valve, in which the major relieving device is with a self-actuated auxiliary relief valve. The relieving device is controlled by the auxiliary relief valve. Pilot operated safety valves are of two types they are diaphragm and piston type. The diaphragm type is used for low-pressure applications. In the case of the piston-type valve, it has a main valve that uses a piston-shaped closing device and an external pilot valve.

Types of safety valves on the basis of the nozzle

In this type the nozzle is the raised face portion of the flange, it is used for liquid and vapor relief and also has a closed bonnet.

These valves are also used for liquid and vapor relief. Nozzle consist of insert screwed into base connection can be flanged, weld ended or screwed

In this type, the nozzle is formed from the base of the valve, mostly these valves have a screwed connection but they are also available in flanged or weld-ended and these valves would fully open at twenty-five percent overpressure and they have closed bonnet.

What is an electromatic safety valve

This valve is a pressure switch initiated safety valve and it is set to lift on a particular pressure but a regular safety valve will only lift after the accumulation of pressure.

How to install the safety valve

During the plant commissioning procedure, the valve would be lifted and there would be seat damage if there is debris or dirt. So the system should be flushed out before installing a safety valve if done so foreign matter won’t pass through the valve. The valve must be installed in a place where dirt and debris must not collect. The safety valve should be mounted vertically in a pressure vessel. The pressure drop in the valve inlet piping must not exceed more than three percent of the set pressure. In steam applications, the safety valve must be installed above the steam pipe. It should not be installed below because, the steam will condense, fill the pipe, and wets the upstream side of the safety valve seat.

How to troubleshoot and maintain a safety valve

The system operating pressure must not be too close to the valve set pressure. A safety valve needs a five to ten percent difference between the operating and set pressure. Safety valves must not be set to less than 15PSI. It should be in the range of 20-25 according to the pressure that the vessels could handle. We must not install safety valves horizontally safety valves are meant to work only in a vertical position, if not it won’t work properly. Safety valves must be stored in a dry environment and protected from weather, they should not be removed from the skids or crates until immediately prior to installation. The valve must be kept in a way that the inlet is down so that damage can be prevented. Safety valves must be subjected to an annual periodic inspection. If the safety valves are installed outdoor then they would be exposed to wind, air, snow, dirt, so certain safety features must be done. The inlet neck of the safety valve and the valve body must be insulated and the exterior part of the insulation must be weatherproof. Certain spares must be needed for the safety valve they are flat lapping plate, high-temperature lubricant, a lapping compound of grit size.

What can be the cause of safety valve leakage

Leakage can happen if there is dirt or scale sitting on the seating surface. Lifting of the lever can remove the dirt. Mostly the leakage can be caused after the initial manufacture and test, this problem occurs from the damage during transit. If the installation is not proper it can cause valve leakage. Teflon coat or pipe dope can cause valve leakage. So it must be checked when the valve is installed we must ensure that it is not too low on threads if this gets into the valve it can stick on the seating surface and can cause a leak.

What are the applications of safety valves