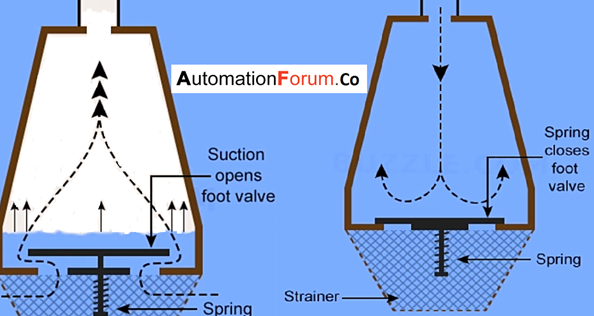 A foot valve is a type of non-return valve, with strainers mounted at the open end of the pump suction pipelines. Foot valves are used when the pump has negative suction. These valves are placed at the pumps wet well. The flow area of the foot valves is larger than the pipe size, so there is only less head-loss. Foot valves are known for their ability to keep the continuous presence of suction within the pump. A foot valve is a special design of the lift check valve. These valves are designed for up-flow and are attached to the bottom of a pump suction pipe. Foot valves can cause leakage, when they are used with fluids that have solids, and they are difficult to service. Foot valves would decrease the net positive suction head available.

Why do you need a strainer for a foot valve

Strainers are used to protect the valves it will prevent the accumulation of debris, the debris could jam the foot valve, and it could damage the pump. So strainers are an important part of a foot valve.

What are the functions of the foot valve

The basic function of a foot valve is to prevent water from flowing back down the pipe. It can also be described as a foot valve that would only allow the pump to pull water up but does not allow the water to flow back down.

What are the parts of the foot valve

What are the features of the foot valve

Most of the foot valves have self-tapping male and female threads for easy installation. Internal balls for quick sealing and valve reaction, and has the flexibility to fit various types of water pump uses, such as well development and volatile organic compounds sampling and purging. Foot valves are cheaper when compared to other valves. Mostly foot valves are made up of heavy-duty cast iron and bronze, as well as PVC. So that they would last longer when submerged in water.

What are the uses of the foot valve

Foot valves can prevent the pump column from draining upon pump shutdown, these valves are widely used in all kinds of pneumatic system. They are used in a suction line of the pipeline as well. Positive sealing action is provided in both low and high pressure without slamming. The foot valve offers spring load closing and can be installed in any direction. Foot valves have low head-loss. Foot valves can maintain hydraulic pressure.

How foot valves are constructed

Foot valves are either made of stainless steel or PVC plastic. Foot valves are able to keep the suction continuously in the pump. Because of the larger flow area, the head-loss is very less. Foot valves usually come with surge blocks. Surge blocks will press the valve body so that the residues can be removed and by this, the flow of water would very easy. These valves are expanded by the help of surge block. There are instances where the pressure can actually pop the valve out and causes major leakage, thus it is important to use the right kind of material in the tubing to be able to support the force within the valve.

How does a foot valve work

Most foot valves are fitted with inlet strainer, and they filter the incoming water and prevents the valve damage. Electric pumps are used to pump water from a lower level to higher level and this would require a lot of energy, the could flow back to the source from the higher level to the lower level if the pump is turned off the suction is gone and the water will flow in the reverse direction due to the gravity, it can be prevented by using foot valves. Foot valves are used to prevent the backward flow of water through the pipe when the water pump is turned off, thus the column of the water in the pipe is maintained and all the issues are resolved. A foot valve is a kind of check valve, and they only open in one direction so the foot valves would only allow a unidirectional flow and it will close off when the direction of flow is reversed.

Foot valves are placed in the pick-up end of the pipe so they are located at the very bottom. In order to pick the water from a lower level pump is used and the pump will create suction and the water is pulled from the lower level, due to the upward pressure the foot valves open. When the pump is turned off the pulling force is removed and water will flow downwards due to the gravitational pull and foot valves blocks the downward flow of water. So the foot valve is a necessary part of the pumping system.

What are the types of the foot valve

These valves have a cylindrical rubber membrane fitted inside a steel strainer. If suction is formed in the strainer, then the membrane will be displaced, so that the fluid can flow through the valve. During the backflow the cylindrical membrane closes the apertures in the valve strainer thus the valve is closed.

In this type, a cylindrical inclined chamber and seating are used to guide the ball valve. Because of the inward flow, the ball will be displaced, along with its chamber, but when the flow rate decrease it runs down the chamber onto its seat. These valves are mostly used for contaminated water.

Foot valves are classified according to the flow system. Microflow system valves are used in direct push technology micro-wells and multilevel good installation. These are mostly made of stainless steel. Another one is high flow system valves, they are used on 2-inch wells or larger and can stand high pumping rates and very deep wells. The third type is the low flow system valves and is used in small diameter piezometers which lift up-to 100 feet of water.

What are the applications of the foot valve

What is an unloading valve and how does it work

What is a blow-down valve?