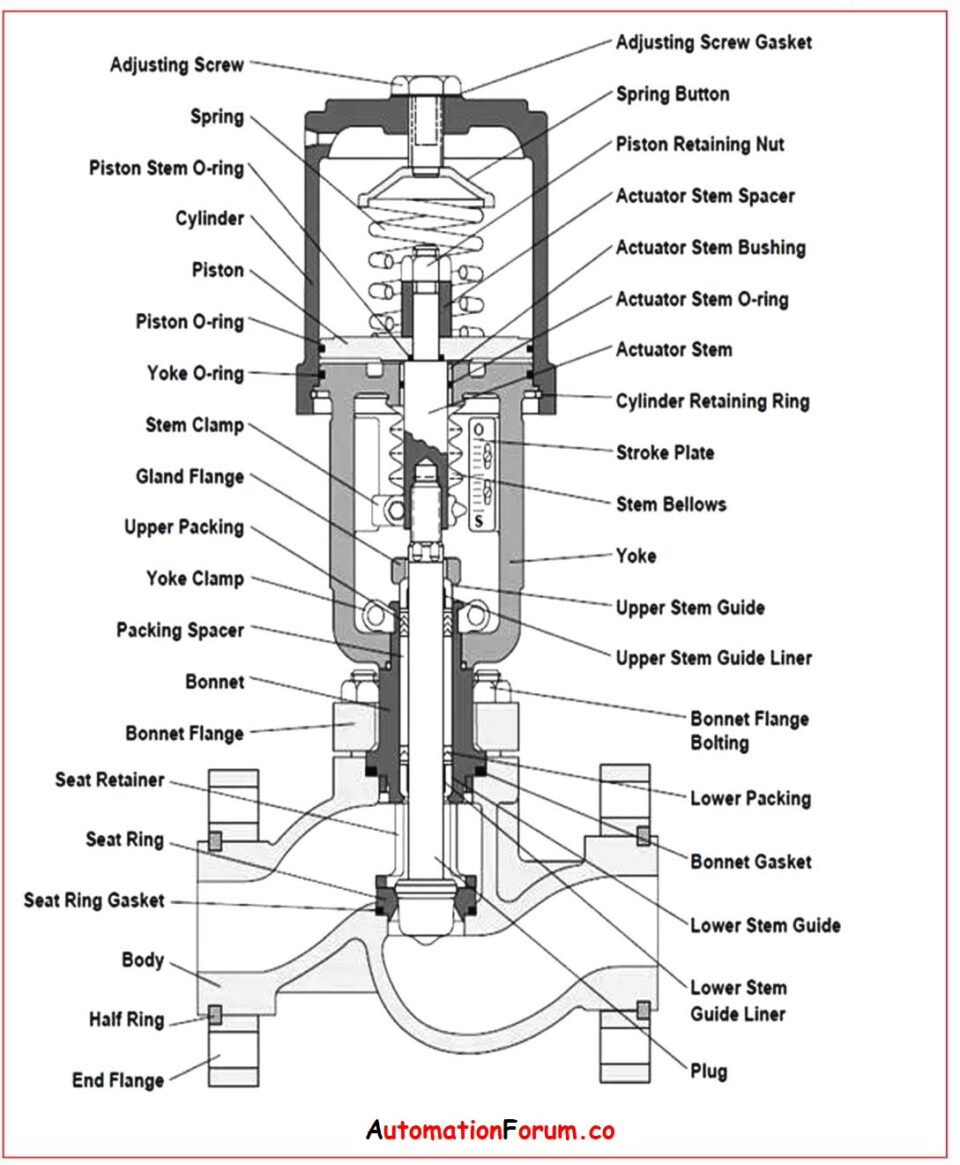 The control valve selection for the process plant requires a particular combination of the valve body, and trim material.

The capacity requirements and system operating parameter ranges must be considered in selecting a control valve to ensure the satisfactory operation of a particular process.

The valve flow characteristic is the most important thing to be considered in selecting a control valve.

Improper size and type of the valve may cause some serious operational issues within the valve or in the system.

The control valves are the essential devices to control or regulate the fluid flow varying the size of the flow passage as directed by the controller.

The control valves are found in all industrial process control applications including power plants, food processing industry, chemical industry, and so on.

Control valves have a capacity to handle all kinds of fluids at temperatures up to 1000°F (538°C).

In selecting the appropriate control valve for the required application the manufacturers and their marketing representatives advise their clients on the right control valve by providing the following information.

The selection information of the right control valve for the required application is shown in the below table:

What are the factors to be considered during the selection of a control valve?

The process industry includes a variety of fluids such as water, steam, gas, some liquid food products, and so on… but for every fluid type, the same control valve doesn’t function properly due to different properties of fluids. Depending upon the fluid type the control valve must be selected.

The selection of the control valve and the valve sizing is the most important step to be considered for the particular application.

In addition to this, the fluid parameters like temperature, pressure, and flow rates of the particular fluids must be considered in selecting the valve. The metal valves of higher protection can withstand higher temperature and pressure values.

The term functionality defines the actual purpose of the valve.

The 2-way valve is selected only for ON/OFF control.

The 3-way valve is selected for ON/OFF control and diverting the fluid path.

The actuation system defines the operation of the control valve.

In some cases, the valve needs to operate manually by hand.

And the valve will need to be actuated to TURN ON or TURN OFF by a pneumatic or hydraulic supply.

The valve size is the main thing to be considered, if the control valve is of larger size for the required application then the valve travel must be of a very small percentage. A small change in valve position results in a large effect on flow which in turn makes the valve hunting.

What is the flow characteristic of the control valves?

The flow characteristics of the control valve define the inherent relationship between the fluid flow and valve opening. This allows a certain amount of flow through the valve at a particular opening.

The following are the most common flow characteristics of the control valve:

What size of the valve must be selected?

According to the thumb rule,

The low profile rims with a diameter of around 25mm require a valve stem of 40mm.

The wheelsets with a diameter of around 45mm require a valve stem of 60mm.

While anything taller or larger than 50 mm demands a valve stem of 80mm.

What are the various types of control valves?

How the control valves are classified based on the number of plugs?

The valve has a single plug and a single seat within a single valve body. Large amount of force is required to drive the stem.

The valve has two plugs and two seats within a single valve body. It requires a small amount of force to drive the stem.

How to select a Control Valve for a particular application?

Though the control valves are available in a variety of types

2.       It should have a lack of turbulence to flow when the valve is fully opened as turbulence reduces head pressure.

3.       It must have a quick opening and closing mechanism

5.       It should have the ability to flow in one direction

6.       The valve must have the ability to handle abrasive fluids.

How the control valves are classified based on Action?

Control valves that are operated through pneumatic actuators can be either

What is a proportional control valve?