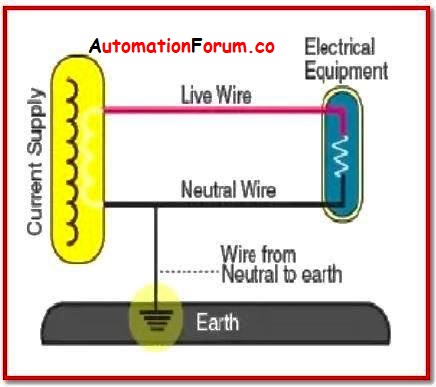 The term “neutral” refers to a point with zero potential. Because each single phase load requires the current return channel, the perfect ground point is called Neutral. To maintain a continuous flow, the electron should travel from source to load to source. As a result, it necessitates a flawless return path. If you use ground or the earth as a current return path, the ground will always have some resistance, which will be added to the load, resulting in a voltage drop across the ground. The exact output from the source cannot be acquired due to the ground resistance. As a result, the perfect ground point from the source, known as neutral, is obtained.

By making Star Connection, the star point of a three-phase supply system is referred to as Star Point or Neutral Point. The wire that emerges from that location is known as Neutral wire, and it is always represented by black wire.

In the three-phase supply system, star and delta connections are made. Wires are given to the load from their points. The sum of current flowing across all three phases in both of these connections is zero ‘0’.

Because the maximum value is at one step in the construction of three phases, the same phase is at the highest value. The third failure is at or near zero.

If there is a failure in your electrical system, accessing an active metal element could result in an electric shock. This is due to the possibility that electricity will use your body as a connection between the live and earth parts.

Earthing is a technique for preventing electric shocks. It accomplishes this by providing a conduct for a fault current to flow to ground as a protective conductor. It also causes the protective device either a circuit breaker or a fuse to turn off the power to the circuit with the fault.

Earthing provide an alternate path for the fault current to flow so that the user is not harmed. Earthing ensure that none of the exposed conductive elements reach a harmful voltage. It also avoids overcurrent or excessive voltage on appliances or equipment; keep the voltage in any section of an electrical system at a defined level.

Good Earthing must have a low enough impedance to allow enough current to flow through the safety device to disconnect the supply less than 0.4 seconds. Fault current is substantially higher than the circuit’s full load current, melting the fuse. As a result, the device is automatically unplugged from the power supply.

Connection of current carrying parts to ground, i.e. connection of power system neutral to ground, is referred to as grounding of an electrical system. Grounding is done for the safety of the equipment.

Measures for protecting the circuit portion are included in the grounding. It performs the circuit’s required function or functional feature. The act of grounding can be done directly or indirectly.

Difference between Neutral, Earth and Ground:

Various types of Pumps and its Application

What are capacitor, resistor and inductor?