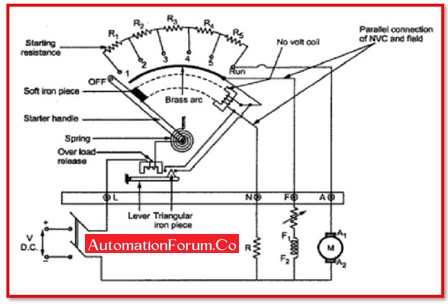 What is 3-point Starter?

An electrical tool called a three-point starter is used to start and maintain the speed of a DC shunt motor. This circuit’s series resistance connection reduces the initial high current and protects the apparatus from any electrical malfunctions. Here, the presence of back 3-point is crucial for driving the motor. This emf increases as soon as the motor’s armature begins to rotate in the magnetic field by producing an action that also opposes the voltage supply.

A starter’s only structural component is variable resistance. It is separated into several portions known as studs. The armature and all resistors are connected in series to reduce starting inrush current.

The 3-point starter, as its name suggests, has three points or terminals.

The overload relay (OLR), conducting lever, and no-volt coil are additional beginning components (NVC). NVC is utilised for both holding the lever and protective functions, and OLR is used for both.

To increase the motor’s speed until it is in the RUN position, the handle of the three-point starter can be shifted from one stud to another (contact positions). In this position, there are three key factors that are taken into account, including the following.

With the help of an electromagnet enhanced by an NVC, the H-handle in the circuit is kept in the RUN position (no volt trip coil). This NVC coil and the motor field winding can be connected in series. The NVC will become powered if it was turned OFF during the incident or if it fell below a predetermined value.

The handle-H is both released and drawn back to the OFF status by the action of the S-spring.

H-handle will first travel in a clockwise way toward stud1 when a DC supply is turned ON when it is in the OFF position. As the whole resistance is initially connected in series with the armature circuit, the winding of the shunt field is directly related across the voltage supply.

The no-volt discharge coil is demagnetized and the H-handle returns to the OFF position in the event that the voltage supply is abruptly interrupted. A supply failure would occur if the no-volt coil were not used.

The final stud would continue to hold the H-handle. The DC motor will be openly allied across the supply if the voltage supply is re-established, producing an extremely high armature current.

What is 4-point Starter?

A four-point starter has four basic operational points, including

Where, “N” is used to connect the No Voltage Coil independently across the supply.

The over-load release is connected to the positive terminal. The other end of the OLR is attached to the starter handle, which can be moved manually to control the beginning current with increasing speed via a series of resistor terminals (the contact points of these sections are known as studs and are illustrated separately as OFF, 1, 2, 3, 4, and 5). Below the resistors that provide current to the field winding and no-volt coil is an arc composed of copper or brass. The current carrying handle that passes over the arc keeps in contact with it.

By adjusting the starter handle to the beginning resistor terminal, the motor is connected across the supply when this is done. The OLR (overload release) is where the current from the terminal L flows before it reaches the starter handle. There are currently three separate pathways for the current coming from the handle.

The important thing to remember in this case is that changes in field current have no impact on the electromagnetic pull that the NVC coil exerts on the handle. Because the field circuit is independent of the NVC circuit (NVC current route) (field current path). Due to its interdependence, when the field circuit is unintentionally left open while starting the motor, a protection resistance is connected in series with the NVC to control current flow. As a result, the motor’s starting current is controlled, and any changes in the field’s excitation have no effect on the NVC coil, keeping the starter handle in the ON position throughout the motor’s operation.

Difference Between 3-point and 4-point Starter:

Essential Functions of Instruments in a P&ID

Difference between the electric circuit and magnetic circuit