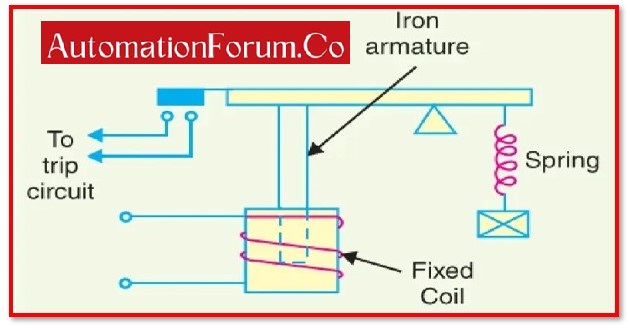 A balanced beam type relay uses two electromagnets at either end of a beam as an alternative to an attraction armature type relay. The first magnetic produces operating torque, and the other magnetic supplies retraining torque. The beam is positioned in the middle & typically maintains a horizontal posture.

Based on the formation theory, a balancing beam relay works. A single beam is supported by a single hinge. As a result, there are two forces acting on the two ends of the beams. Both forces are travelling in parallel directions. Under typical working circumstances, the torque generated by the forces in relation to the hinge is the same in both direction and magnitude. These torques include

are capable of producing the restraining torque.

This kind of relay uses an attracted armature.  When a failure occurs, the operating coil’s current crosses its pick-up value, increasing pick-up value. This increased mmf causes the coil to attract the beam end, increasing torque at the appropriate end of the beam.

The balance of the beam is being disturbed as the torque increases and beam end corresponding with the operational torque moves downward to close NO contacts of the relay as a result of this unbalanced torque condition.

It results in the trip circuit being turned off. As a result, the circuit breaker turns on, isolating the faulty circuit.

are the major disadvantages of balancing beam relays.

Balanced beam type relay are generally regarded as distinct relay types because they are used in various application areas.