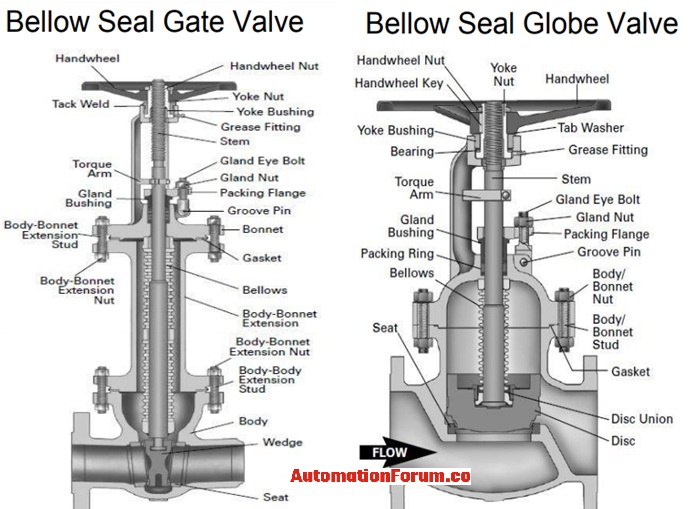 A bellow seal valve is a control valve that doesn’t have a conventional gland packing and instead of that these valves have a bellow cartridge and this would be welded to the valve’s bonnet and stem. The bellow can be compared to a coiled spring because it can be flexed in compression or in extension. The bellow seal valve is similar to a globe valve and their only difference is that in a globe valve we can see a gland packing along the stem but in a bellow seal valve, bellows are used to prevent the leakage instead of the packing. These valves are totally leakproof and can handle corrosive liquids. We can see these types of valves in the butadiene extraction unit.

What are the features of a bellow seal valve?

Most of the control valves are used for flow and pressure control of process fluid. So the chances of leakage are very high and because of the leakage, there could be loss of material. The material could be radioactive or some kind of chemical and it could lead to many problems in a plant. The fluid which is used could be corrosive, explosive, or poisonous. So in order to solve this problem we can use a bellow seal valve.

How to install a bellow seal valve?

We can install a bellow sealed valve in any position, but it should not be installed in a way that the stem is upside down. So we install a bellow seal valve by considering this then we can prevent the accumulation of debris in the bellows area. So before the installation of the bellow valves, we must make sure that the pipes and valves are free from impurities. The pipes must be connected in a way that there won’t be any undue tension acts on to the housing of the valve.

How bellow seal valves are constructed and what is a bellow?

The valve body material must be selected according to the pressure, temperature, corrosive, and erosive property of the flow media. The cartridge of the bellow will be welded, there are many convolutions in a bellow cartridge and these convolutions could be compressed or expanded according to the valve stem movement. The material that is used for the construction of the bellow would be stainless steel and it would also have titanium added to it which would allow the bellow to withstand high temperatures.

What is a bellow?

How does a bellow seal valve operate and what are the types of bellow?

This type of bellows is constructed by rolling a flat sheet into a tube, mostly it would be a thin wall foil. This tube will be then welded longitudinally, this tube will be mechanically or hydrostatically formed into a bellow with rounded and widely spaced folds.

These bellows are made by welding washer-like plates of thin metal together at both the inner and the outer circumference of the washers like plates. A welded type bellow has more folds per unit length when compared to the forged bellows. The welded bellows are shorter in length.

Difference between a forged bellow and a welded bellow

The forged bellow has good durability because these bellows are constructed from a single piece of metal and because of this the forged bellow would have good cycle life. In the case of the welded bellows, the reliability will be low because this type of bellow has small welded spots, because of this heat would be affected to this bellow, and thus its cycle life will be less.

The forged type of bellow is really easy to test for quality because the forged bellows are constructed uniformly. In the case of welded bellows, it is very difficult to inspect the welded spots for quality and because of this, quality control will be really difficult.

How is a bellow sealed valve different from piston valves and conventional valves?

The bellow seal valve has no stem leakage, while in a piston valve stem leakage could occur when the rings wear out. In the case of the conventional valve, stem leakage is very common because of the friction between the stem and the gland.

There won’t be any media loss in the bellow type, while in the case of the conventional and the piston valves there could be large media loss.

The bellow seal valves has good life while the piston and conventional type only has very low life.

The bellow valves are very safe and any media can be used, while the piston valves can only be used for limited media like hot water and steam. The conventional valve is really unsafe if the media is hazardous.

What are the advantages of a bellow seal valve?

What are the applications of a bellow seal vales?

What is an emergency stop valve?