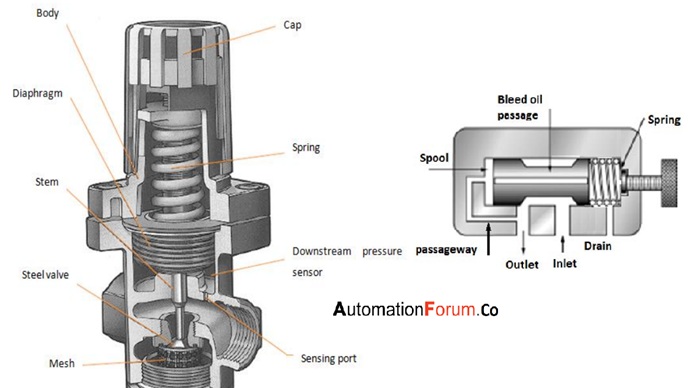 What are the types of pressure control valves

The major types of pressure controlling valves are

Why do we need to use a pressure control valve

Types of pressure control valves and how it works

How to select a pressure regulator

The counterbalance valve allows flow in one direction and restricts the flow in another direction. This valve would maintain the backpressure so that it can prevent the load from falling. These valves are also known as load holding valves and these valves are installed between the directional control valve and a cylinder. This valve would provide a hydraulic resistance to the cylinder. These valves can maintain a set pressure in a part of the circuit and by doing this it can balance the weight or force. These valves are used with a single-acting cylinder, which lowers the load. So when the pump is not working these valves can prevent the load from falling down and it is done by maintaining a back pressure against the load. When the pump starts working the fluid will flow through the check valve and it would only provide less resistance. The counterbalance valve would open when the directional control valve moves to the right and it would provide resistance to the flow and this resistance can be controlled by a spring and by this the valve prevents the load from quickly falling.

These valves can control the operation between two branches of a circuit. These valves control the fluid flow in a sequential manner and they can control the operational sequence of two actuators. The flow can be diverted in a sequential manner by this valve. This valve can control the pressure in a valve and it can sense the inlet pressure. By using a sequential valve we can be certain that pressure level is achieved in one branch before activating another one. So the fluid flow to the next part is only done after completing the first part. During the normal condition, the sequence valve would be closed and permits the flow until the valve reaches its pressure level. So when the first section is completed the pressure would rise in this section and it would be sensed by the pressure sensing passage, because of this the pressure in the spool increases than the spring pressure and the valve spool shifts. Then the flow is transferred to the next circuit.

These valves can save energy by unloading a pump when there is no need for flow. So by using this valve the pump can be operated at minimum load. These valves are used in hydraulic circuits it can transfer the excess fluid to the tank and by doing this it can decrease the heat and save energy. The port of the unloading valve will be connected to the line that is to be unloaded. The pressure is sensed by using the pilot port and sends the signal to unload the flow. So when the system pressure reaches the setting pressure then the spool will be lifted. Then the flow from the pump to the tank takes place.

Check the following link to get more info about control valves

What is a poppet valve and what does it do