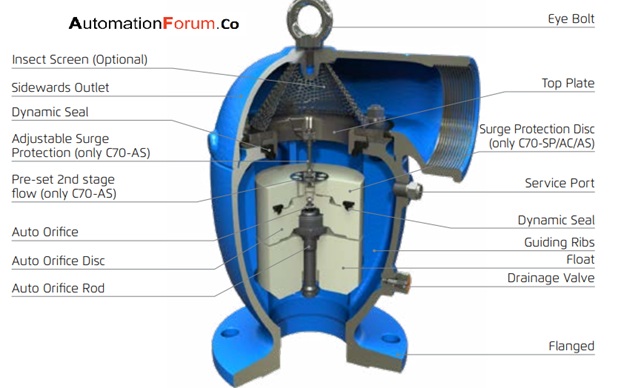 What is air valve and why air valves are used

Air valves are used in pipelines, these valves are capable to introduce or remove the air from the pipeline. In a pipeline, air must be removed or reduced otherwise it would create many problems. Pipelines would contain air and it must be removed. The air could enter the pipeline because of the water, water has two percent of air, and the air would come out of water because of the rise in temperature or a drop in pressure. Air can also enter in a pipeline because of the equipment like pumps, and fittings. The operation of a system and efficiency would be affected if the air is present in the pipeline. If the air is not removed from the pipeline then it will cause many problems such as it could damage the pumps, valves, and pipe. It can be the reason for faulty instrumentation readings. So air valves are an exceptional factor in pipelines.

What are the functions of air valves

The function of the air valve is to automatically exhaust small amounts of air that collect at system high points once the system is filled and up-to pressure. These valves would vent the pipeline during the initial filling and draining. It would remove the accumulated air at high points during pressurized operation of the system. Air valves are capable to decrease the sub-atmospheric pressures during transients.

How to install air valve

How air valves are constructed

These valves would remove small air pockets that are accumulated in the pipeline. Mostly the orifice size of the air release valve could be between 1/16 and 3/8 it would be depended upon the valve design and working pressure. So when the air bubbles enter the valve then the liquid will be displaced within the valve because of the air bubbles and it will lower its level in relation to the float. If the level of the liquid is lowered in a place where the float is no longer buoyant, then the float will drop. Due to this process, the valve seat would open and releases the air that is in the upper part of the valve. So when the air is released the liquid level in the valve rises lifts the float and closes the valve seat.

These valves are float operated and its orifice is big which is in the same size as the valve inlet. This valve can remove a large amount of air. The major function of this valve is to remove a large amount of air from the system when it is being filled and also it must allow a large amount of air into the pipeline when the pipeline is emptied. So when the system is filled the fluid lifts the float until it closes the orifice. So the orifice will remain closed until the system is emptied. During the operation of the system, the air could enter the valve and displace it. The valve will be closed because of internal pressure. The valve won’t open again until the system pressure reduces and reaches atmospheric pressure.

This valve can act as an air release and air vacuum valve. It can do both these valves function and hence the name combination valves. The combination air valve combines air and vacuum, large orifice, and an automatic small orifice in a single body. These valves can be used with liquids that carry solid particles such as sewage and effluent. These valves can remove large amounts of air when it is being filled and also allow air into the system when it is drained. These valves can also remove air that is collected at the high point of the system. When the system is filled completely. So basically this valve has all the features of the above two valves and is also known as double orifice valves.

What is a kinetic air valve

How to size air valves

Valve size must be determined for filling and draining. Air vacuum valve sizing must be done with a larger diameter. The sizing for pipeline filling is done by venting the air at the same rate as the pipe being filled. In the case of pipeline draining the air, the valve must be sized to receive air at the same volume as the pipeline being drained. Pipe burst analysis and pipe collapse pressure must be checked.

How to do the maintenance of the air valve

Inspection and flushing of the air valves must be done annually and must watch for external leakage. The performance and life span of the valve is depended on the working conditions.

What are the applications of the air valve

What is a float valve and how does it work

What is a capillary tube and why do we need it