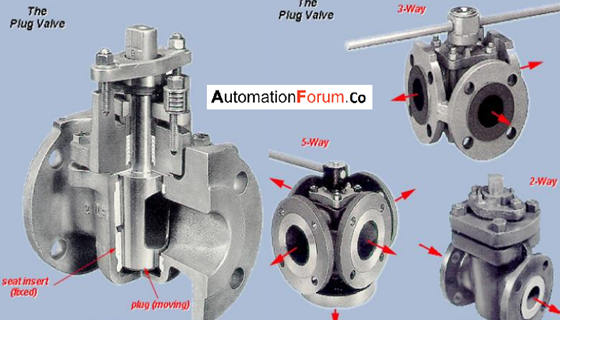 Plug valves are widely used in the process industry, these valves operate by rotation motion and are used to stop and start the fluid flow. Plug valves are basically on-off valves, based on a plug with a rectangular hole through which the fluid flows. The plug could be tapered or cylindrical and they are in the valve body, a quarter-turn rotation is done to make the pipe and hole in the same line and this would be the open state and in the closed state, it would be across the pipe. Plug valves are easy to adapt and they are suitable for multiport use, so that valve can be used to divert the flow. In parallel plugs, the shape of the port is rectangular and triangular for taper plugs. Because of this shape, a slimmer valve can be constructed with less weight. Mostly plug valves are used for starting and stopping the flow, it can also be used for flow diversion. Plug valves are capable to handle fluids with solids in suspension because the seating moves against each other with a wiping motion and in the fully open position.

By using a lubricated plug the valve can be engineered, which uses lubricant to do proper operation over a wide range of pressures.

There is unlubricated design too, that includes seals in the plug and requires plastic bearing systems.

What are the components of the plug valve

How plug valves are constructed

Tapered plug and the body are the main parts of the plug valve, maximum flow efficiency can be created by the proper design of the internal contours of the valve. Mostly in the tapered plug, the port is rectangle-shaped and has round ports. Full flow is obtained when the opening in the tapered plug is aligned in the direction of flow and when the plug is rotated a quarter turn flow is terminated.

How does a plug valve work

With the help of a cylindrical or tapered plug, the plug valve does the quarter-turn operation from fully open to fully closed state. The plug provides a hole through one axis, which can connect the inlet and outlet of the valve, so in an open position, there would be a straight-through flow, the flow would be properly blocked when it is rotated 90 degrees to the closed position.

What are the types of plug valve

In a lubricated plug valve, the plug is provided with a cavity in the middle along its axis. This cavity is closed at the bottom and fitted with sealant injection fitting at the top. The cavity is injected with sealant and the sealant is prevented from flowing in the reverse direction by the check valve below the injection fitting. Lubricated plug valves are safe from fire and have a better life. These valves are used in power plants because of their small size. These valves are able to handle gas and fuel. There won’t be any danger due to leak because they are properly sealed.

In the body cavity of the non-lubricated plug valves, a sleeve or an elastomeric body liner is installed. The tapered and polished plug would act as a wedge and presses the sleeve against the body. So the friction between the body and the plug is reduced by the help of a non-metallic sleeve

What is an eccentric plug valve

What is the difference between the plug valve and ball valve

What are the advantages of plug valves

What are the disadvantages of plug valves

What are the applications of plug valves

To get more information about control valves, check the following link

What are Calibration procedures?

How is control Valve calibrated?