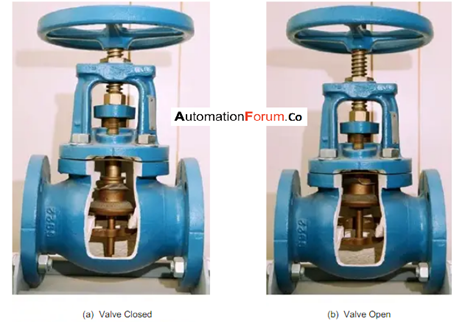 What is a globe valve and what is it used for

Globe valves are linear motion valves and they can be used to start-stop and regulate the fluid flow. Globe valves are mostly used for throttling service and for automatic control. A small movement of the stem is required from the fully closed to the fully open position, with the help of a diaphragm operator the globe valves are easy to automate. These valves have metal to metal seats which can be replaced easily. These valves must not be used for on/off service because a tight seal won’t be possible. The disk in this valve can be removed completely from the flow path or it can completely close the flow path. These valves have one or more ports and their body is globular shaped around the port region. The globe valve is opened with the help of a plug shaped disk and to close the valve this disk seats tightly into the valve. Globe valves can be used as control valves, if the rate, volume, and pressure of flow can be frequently adjusted. The design of the globe valve makes it perfect for flow regulation and to start and stop the flow.

What are the parts of globe valves

It is an important part of the valve, it is connected to the stem and they can be used to throttle the flow.

Cage is a part of the valve which surrounds the plug and is located inside the body of the valve, the cage is the major part that determines the flow of the fluid within the valve. When the plug is moved more of the openings in the cage are exposed and flow is increased

This is the connection from the actuator to the valve and it provides the actuation force. Stems could be either smooth for actuator control valves or they can be threaded for manual control valves.

How does a globe valve work and how is it constructed

In a globe valve, the flow of water is controlled by a movable spindle, the restriction to the flow is done by lowering the spindle to a fixed seat. The spindle is fitted with a washer so that tight closure will be provided and it is enclosed in a chamber that has a globular shape. Because of its spherical shape, these valves are named globe valves and an internal baffle separates the two half of the body. The moving part of the globe valve consists of the disk, valve stem, and a handwheel. A movable plug is screwed to the seat so that the valve can be closed and this plug is also known as a disk. The working principle of the globe valve is that the perpendicular movement of the disk away from the seat. So when the valve is closed it will cause to close the space between the disk and seat ring. That’s why these valves are used to start, stop, and regulate the fluid flow. There are manual and automated globe valves and an automated globe valve has a smooth stem in place of threaded and it is opened and closed by an actuator assembly.

What are the types of globe valve

In z type, it is named so because the fluid changes direction as the letter Z. This type of globe valves is mostly used for small size low-pressure applications.

In angle type globe valve, the flow direction changes only once and the pressure drop is less than that of the Z type and these valves are used for medium pressure applications.

In a Y type globe valve, the seat is placed 45 degrees to the flow direction and this will straighten the flow path and reduce the pressure drop, these valves are used for high-pressure applications.

Classification of the globe valve according to the disk type

Classification based on the type of body bonnet connection

This design is used in many globe valves and it needs a gasket to seal the joint between the body and the bonnet.

This type is used for high pressure and high-temperature applications. The force on the gasket in the pressure seal valve will be high if the body cavity pressure is high.

What is the difference between the gate valve and globe valve

What are the applications of globe valves

What are the advantages of globe valves

What are the disadvantages of globe valves

To know more about the control valves check the following link