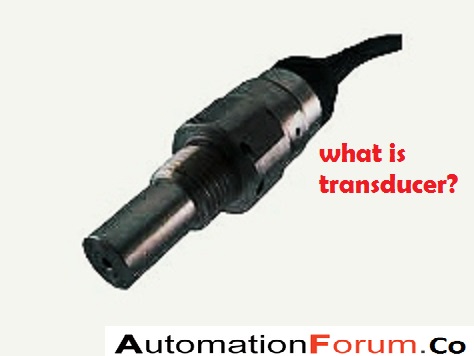 The transducer consisting of two important and closely related parts

HOW ARE TRANSDUCERS CLASSIFIED?

Transducers are classified into 5 as,

1. On the basis of transduction form used

2. As primary and secondary transducers

3. As passive and active transducers

4. As analog and digital transducers

1. Classification based on the principle of transduction form used:

This classification is based on the principle of transduction as resistive, inductive, capacitive etc. depending upon their conversion into resistance, inductance or capacitance respectively. They can be classified as thermoelectric, piezoelectric, electrokinetic, optical and magnetorestrictive.

2. Classification as primary and secondary transducers

3. Classification as Active and Passive transducer

In the example shown above, the crystal is sandwiched between 2 metallic electrodes, and the entire sandwich is fastened to a base which may be the floor of a rocket. On the top of the sandwich a fixed mass is placed which exerts a certain force due to acceleration on the crystal due to which a voltage is generated. The voltage output is proportional force and hence is proportional to acceleration. The property of piezo -electric crystal is that when a force is applied to them, they produce an output voltage.

Passive transducers are one which require external power source for energy conversion. In passive transducers electrical parameters like resistance, inductance, capacitance causes a change in voltage, current or frequency of external source. Resistive, inductive and capacitive transducers fall in this category.

This is an example for passive transducer. A linear potentiometer is a resistive transducer powered by a source voltage ei and is used for the measurement of linear displacement xi.

Transducers, on the basis of nature of output can be classified as analog and digital.

An example is a current carrying coil moving in a magnetic field is an inverse transducer as the current carried by it is converted into a force which causes a rotational or translational displacement. A large number of data indicating and recording devices are inverse transducers. Such devices which include instruments like pen recorders, oscilloscopes that convert electrical into mechanical movement are placed at the output stage are called as output transducers. The below diagram shows a piezo -electric crystal acts as an inverse transducer. When a voltage is applied across its surfaces, a mechanical displacement is caused as it changes its dimensions.

WHAT ARE THE BASIC REQUIREMENTS OF A TRANSDUCER?

There are 8 basic requirements for the proper functioning of transducers;

What is a globe valve and what is it used for

What is a flapper nozzle mechanism?