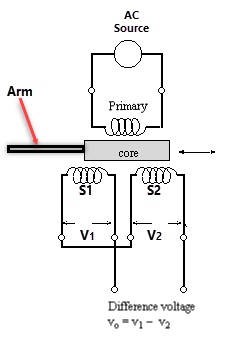 Linear Variable Differential Transformers, LVDT, are the most commonly used passive type transducers. They work under the principle of a mutual inductance change due to the movement of a magnetic core. This movement produces an electrical output proportional to the displacement of the core. The transformer has three solenoid coils placed end to end around a tube. The central coil is the primary coil, and the two external coils are the secondary coils. A cylindrical ferromagnetic core, attached to the object whose position is to be measured, slides along the axis of the tube. An alternating current is driven through the primary, causing the induction of a voltage in each secondary proportional to its mutual inductance with the primary. The frequency is generally in the range of 1 to 10 kHz.

As the core moves, these mutual inductances change, causing the voltages induced in the secondaries to change. The coils are connected in reverse series, so that the output voltage is the difference (therefore, “differential”) between the two secondary voltages. When the core is in its central position, equidistant between the two secondaries, equal but opposite voltages are induced in these two coils, so the output voltage is zero. When the core moves in one direction, the tension in one coil increases as others decrease, which causes the output voltage to increase from zero to a maximum. This voltage is in phase with the primary voltage. When the core moves in the other direction, the output voltage also increases from zero to a maximum, but its phase is opposite to that of the primary.The magnitude of the output voltage is proportional to the distance moved by the core (up to its travel limit), so the device is described as “linear”. The voltage phase indicates the direction of travel. Because the sliding core does not touch the inside of the tube, it can move without friction, so the LVDT is a highly reliable device. The absence of sliding or rotating contacts allows the LVDT to be completely sealed against the environment.

Advantages of LVDT are-

1. High range: the LVDT has a very high range for displacement measurement. This can be used to measure the displacement from 1.25 mm to 250 mm.

2. There is no physical contact between the mobile core and the coil structure, which means that the LVDT is a frictionless device.

3. High input and high sensitivity: the LVDT provides a high input and many times it is not necessary to amplify.

4. LVDT has low hysteresis and, therefore, the repeatability is excellent.

5. The fact that LVDT is a transformer means that there is complete isolation between the excitation voltage given to the primary winding and the output produced by the secondary windings. This makes the LVDT an effective analogue computing element without the need for protection amplifiers.

1. They are sensitive to a stray magnetic field.

2. Many times the performance of the transducer is affected by vibrations.

3. The temperature affects the performance of the transducer.