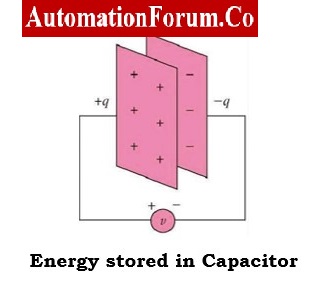 An electric circuit is made up of many circuit components joined together to provide a closed path that allows electricity to flow. An electrical circuit element is the mathematical representation of an electrical device and is entirely defined by the relationship between voltage and current. As a circuit element is the most fundamental component, it cannot be separated into other devices.

What is the units of electrical elements?

What is a Capacitor?

Capacitance is calculated as

– The permittivity of the dielectric material between the plates (F/m),

A – The surface area of each plate (m2 ), D is the distance between the plates (m)

Capacitor is a circuit device whose terminal voltage directly proportional to integral of current with respect to time.

Instantaneous power delivered to the capacitor:

Stored energy in the capacitor:

Either the capacitors can be connected in series or parallel.Capacitors in parallel are added together – capacitance increases.In series capacitance is reduced.

Capacitors are classified based on their polarity as,

Depending on the change in capacitance, the capacitors may be of two types namely fixed capacitors and variable capacitors.

What is a Resistor?

The resistor structure is shown above. In the above structure, we have 4 different bands namely A, B, C & D.

The value of resistance can be calculated by standard color code per EN60062:2005 is as follows:

Zero ohm resistors, which has a single black band.These are lengths of wire wrapped in a resistor shaped body that can be substituted for another resistor value in automatic insertion equipment.

The resistance can be calculated as

Where, r is resistivity of material (W-m), L is length of conductor (m), A is area of cross-section (m2)

Instantaneous Power delivered to the Resistor:

Stored energy in the Resistor:

What are the types of Resistors?

Depending on the changing of resistance value, there are two types of resistors

What is a resistor used for?

The amount of electrical current that can flow through a circuit in an electronic device is controlled or limited by a resistor.

What is theory behind resistor?

Circuit components called resistors obstruct the flow of current. A pure resistor generates heat from electrical energy. This energy is transformed into light, motion, heat, and other types of energy via components like resistors.

How a resistor work in circuit?

Resistors in the circuits stop an excessively high current from harming the breadboard, wires, battery. Also, the resistor regulates the electron flow.

What is the unit of resistance?

The unit of resistance is ohm.

What is an Inductor?

An inductor is essentially a wire with a limited length that has been wound into a coil. An inductor is another fundamental component of a circuit that is used to add inductance to an electrical or electronic circuit. An inductor prevents any change in the electric current. The symbolic representation & internal structure of inductor is shown below.

Inductance can be calculated by

where N is number of turns in coil, A is the cross-sectional area of coil, m2, l is the length of the coil (m) and m is the permeability of the core material H/m.

In terms of the relationship between voltage and current, an element with two terminals whose terminal voltage is directly proportional to the derivative of current with respect to time is known as an inductor.

The voltage across the inductor would be zero if the current through it remained constant. An inductor using DC acts like a short-circuit coil. An inductor’s current cannot abruptly change. The ability of an inductor to store a limited amount of energy in the form of a magnetic field is a one specific characteristic. An ideal inductor only stores energy rather than releasing it.

Instantaneous power delivered to the Inductor:

Stored energy in the Inductor:

Inductors can be connected in either series or Parallel. Inductors in series are added together – inductance increases. In parallel inductance is reduced.

Learn how to read an electrical drawings?