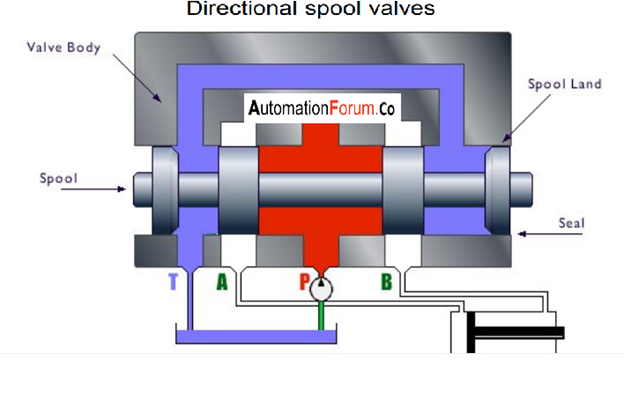 What is a spool valve

Spool valves are normally designed so that the leakage in the spool is small compared to the hydraulic system flow rate. Spool can be considered as a valve component that has seals mounted along its surface. When the valve is actuated, the spool shifts cause the seals to travel along the bore, opening ports to allow airflow. Spool valves regulate the flow of fluid in hydraulic systems. Spool valves would slide backward and forward so that the fluid flow can be either in one direction or another around a circuit of pipes. Spool valves have two basic components, a cylindrical barrel in which slides a plunger or spool. Blocking of the ports is done by glands, it can also be done by the spools diameter section, with the intervening waists sections that also does the interconnection of the port through the barrel. So that it is can do multi-way and multi-positioning switching. Spool valves are very simple and are low of cost, to get a proper sealing a proper surface finish is needed for the barrel bore and spool and requires close tolerance to provide practical minimum clearance. Glandless spool valves mostly need a lapped fit between spool and body.

What are the types of the spool valve

These valves are cylindrical in cross-section and its lands and grooves are cylindrical too. In this spool valve, the spool is grooved and slides in and out of position within the sleeve, alternately blocking and opening the fluid intake and outtake portals. These valves are widely used in fluid power systems such as pneumatic and hydraulic to control the flow direction and flow control.

Rotary valves have spheres like lands and grooves, in the form of holes. A rotary spool valve consists of the fixed tubular sleeve, within which is rotating X shaped piece called the core. The function of this valve is similar to a revolving door, with each bend of the core functioning as a portal for hydraulic fluid to leave and enter the valve.

How does a spool valve work and where are they used

Spool valves are widely used in many industries, spool valves are used in hydraulics, in which the oil is the energy source and they are also used in pneumatics where the air is the energy source and spool valve does the flow direction of the energy source and these valves does this by combining or switching the paths through which the oil or air can travel. A spool valve is a cylinder inside a sealed outer case and there are several chambers drilled through the case from one side to the other and these are called ports. The major function of the spool is to move within the sealed case and does the opening and closing of these ports depending on the position of the spool. Spool can be moved in many different ways it can be done manually. The energy sources and components are connected to a spool valve by ports and they are the chambers drilled through the outer casing of the valve. Spool valves can be operated in many ways like by using a button, lever, or by a solenoid. Mostly spool valves are referred by 3/2 or 5/3 etc. In which the first number represents the number of ports and the second one represents the spool position. Spool valves are of a wide variety and many types of configurations, some have more ports and are able to control multiple items of equipment at once. The blocking part of the spool is known as lands, and they are raised above the spool core, and if these are made different in configurations they can change the way the port pathways interconnect.

What are the advantages of the spool valve

What are the disadvantages of spool valves

What is a piston valve and how does it work

HOW TO CALIBRATE DIFFERENTIAL PRESSURE TRANSMITTER?