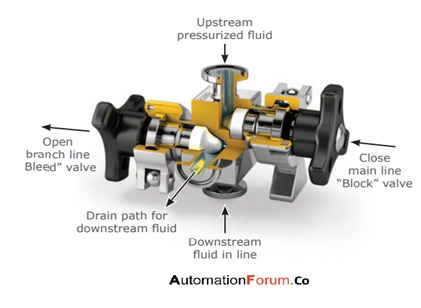 This valve can be considered as a combination of two ball valves and a needle valve. The needle valve will be present between the two ball valves. Double block bleed valves provide zero leakage so that the maintenance and repair can be done very quickly. So the double block bleed valves are used in many applications. These valves are used in some fueling systems because this valve can ensure zero leakage.

What are the characteristics of double block bleed valve

How does a double block bleed valve work

These valves are used in many industrial applications so that they can provide better isolation while doing plant operations. Double block bleed valves are mostly used in industrial systems that require proper isolation and these valves are used for critical applications such as for high-pressure systems and the industrial process that has toxic gas. These valves have two seating surfaces and it can block the upstream and downstream side of the valve. These valves are widely used in the pipeline and process system to provide isolation. The individual seal would be fully isolating when the valve is in a closed position and thus it won’t allow any flow from the downstream and upstream. During the overpressure, the body cavity would bleed because of the thermal relief vent, and because of this, the downstream pipeline would be isolated from the upstream pressure.

What is positive isolation and how is it done

Positive isolation is a process of isolating a section of the plant from the operating section. It can also be considered as isolating equipment from the operating section and the equipment could be pressure indicators and level gauges. The two-block valve would be closed. The bleed assembly and the shutdown side would be drained. The bleed in the double-block and bleed assembly is used to relieve the trapped fluid from space between two block valves.

What is a DIB

How to select a bleed valve

What are the applications of double block bleed valves

What is an unloading valve and how does it work