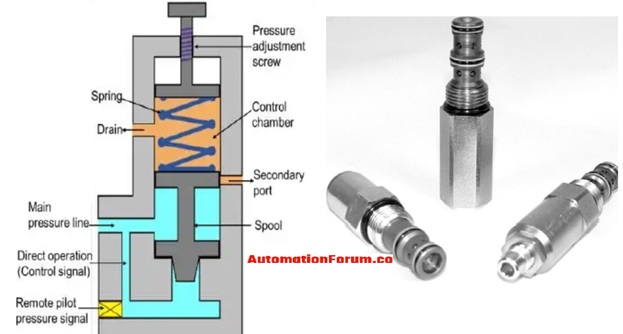 What is the need for a sequence valve and how can it control the pressure?

A sequence valve is called a non-passing pressure control valve which allows one operation to occur before another based on pressure. In order to do certain processes, two or more actuators working in a parallel circuit must move in sequence and it can only be done by using separate directional control valves and limit switches but it won’t be a safe process so for this purpose we can use a sequence valve.

The spring chamber of the sequence valve must be drained in order to prevent the build-up of pressure caused by the leakage past the spool from the pressure at the primary port this drain is connected by an external line to the reservoir.

What is the difference between a sequence valve and a relief valve?

The only difference between a sequence valve and a relief valve is that the former has a spring chamber drain to a separate port. This would reduce the stream pressure increasing the setting of the valve. The major advantage of using a sequence valve over a pilot is to close check, is that when centering the directional valve the pressure can be set higher than any residual pressure.

What are the types of sequence valve?

This type of sequence valve has an internal pilot and external drain. The inlet pressure that acts on the pilot seat area causes the ball to move back against the spring and this would create a flow to the tank through the drain port. When the flow passes through the orifice in the main pool, there would be a pressure imbalance that moves the main spool back against the spring. The valve can change from fully closed to fully open if there is a small rise in pressure. This type of sequence valves can be used for varying flows and higher pressure.

The valve would only open if there is proper pressure at 1 and only after that there will be flow to 2 otherwise it will be blocked so if there is sufficient pressure at 1 the poppet would open and allow flow from 2 to 3. If the pressure at 1 drops below the pilot ratio value multiplied by the predetermined spring setting the valve would close and thus blocks the flow at 2. These valves are mostly used to unload a pump outlet to the tank at a minimum pressure drop and thus we could get high system efficiency.

This is another type of pilot-operated sequence valve, this valve blocks the flow at 1 until sufficient pressure exists at 1 to force the pilot poppet off its seat. This would create a pressure differential across the spool and this would cause the spool to shift and open flow from 1 to 2. The spool will remain open till the flow through the valve is shut off. Mostly these valves are used as a safety device in circuits where overloading or overheating could cause damage if the pressure is held for an extended period of time.

This type of valve is used in a double-acting system for the flow to have to pass past the sequence valve in the reverse direction. In order to do this, a free flow check valve will be mounted around the cartridge.

What are the advantages of sequence valve?

What are the disadvantages of a sequence valve?

A sequence valve could generate a great amount of heat because the first actuator to move takes higher pressure than the subsequent actuators. So because of this, there will be a high-pressure drop in the sequence valve and it is wasted energy.