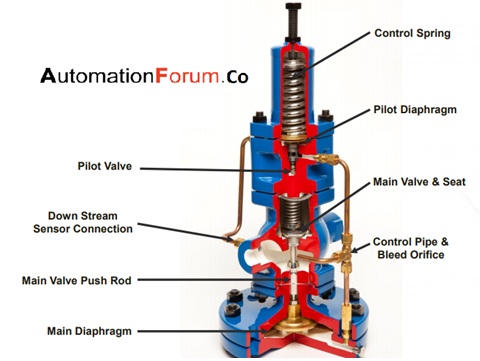 Pilot valves are valves that can control high flows in a system. Mostly the pilot actuated valves are shifted by the pressurized fluids. When the set pressure is reached then the valve would open and release the pressure. When the pressurized fluid hits the valve piston then the flow directing element of the valve would change. The major advantage of a pilot operation is that it can create large shifting force without any impact or wear which could happen in a mechanically actuated valve. Pilot operated valves can be mounted in any remote location to which the pressure fluids can be piped. In this valve, there won’t be any spark or increase of heat and because of this, it can be used for flammable environments.

What are the features and advantages of a pilot valve

In order to control the system that has high flows, pilot operated DCV is used because the system would require a large force to shift the spool. So the pilot valves are installed on the top of the main valve. So the pilot valve would hydraulically shift the main valve. In this valve, the valve piston is indirectly actuated. In order to do this oil is provided to the pilot valve. So while energizing the pilot valve oil will be directed to one side of the main spool and because of this, the spool will be shifted. Thus the pressure port will be opened to the work port and the fluid will be directed a return to the tank. There are certain benefits of external piloting they are constant pressure supply and the source may be filtered separately to prevent the pilot valve silting. DCV valves which are pilot operated could be drained internally or externally according to the need.

This valve has a valve body with inlet and outlet ports and it also has a poppet which is biased against a spring. In this valve, the flow will take place only in one direction. In order to provide flow to the blocked direction, pilot pressure is applied to the pilot pressure port of the valve. If the spring force of the poppet is lesser than the system pressure in the flow port then the poppet will be moved or pushed and the flow will take place. There won’t be any reverse flow because the fluid pressure will close the poppet. In order to allow the reverse flow, then pilot pressure must be provided to the pilot port.

The pilot-operated relief valves are used for emergency relief functions like the overpressure. This valve operates in a different way than a pressure relief valve in a pilot-operated relief valve it uses a system pressure to seal the valve. The major parts of this valve is a pilot valve, main valve, pilot tube piston or disc, and a seat. This valve is also known as a pilot operated safety relief valve. This valve is really sensitive and it can reduce the pressure override. These valves are used for applications that need to relieve large flow with small pressure. The operation of the pilot valve takes place in two stages in the first one which is the pilot stage. In the pilot stage, a small spring-biased relief valve would control the main valve. The other stage is the balanced piston stage and in this, the hydraulic connections are made, so a balance piston is used for the diversion of full flow volume. The inlet pressure will help to hold the piston on its own seat with the help of a light spring. The pilot stage poppet will be lifted when the pressure in the valve is reached to the set value. The unbalance in hydraulic force will be created because of the decreased pressure in the upper chamber of the second stage piston. Poppet will be lifted if the hydraulic force is greater than the mechanical force of the spring. Balance piston will be lifted when the pressure difference upper and lower chamber is enough and full flow would take place. This process will take place until the system pressure is reduced

How to do the maintenance and installation of a pilot valve

What is a poppet valve and what does it do

What is ESDV (Emergency shutdown Valve)? How ESD valve works?

What is an anti-surge valve and what are their functions?