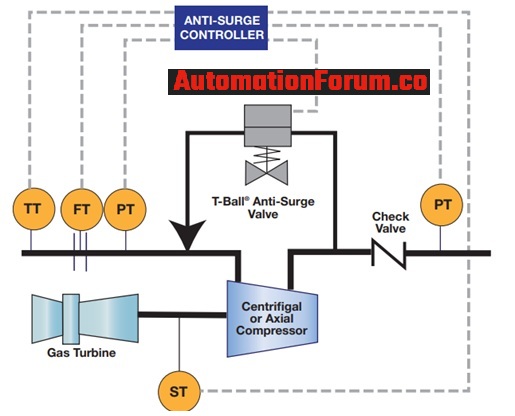 What are the requirements of anti-surge valve?

What are the characteristics of a surge?

What are the consequences of surge?

Why does the compressor have surge?

Mostly these valves are the same the major difference is that the anti-surge valve has a quick opening time so that it can avoid the surge.

How to install anti-surge valve?

How does an anti surge valve work

The anti-surge valve is a fail open solenoid valve, so because of this it needs a high signal to close the valve, so 20mA is needed, and to open the valve a low signal will be used which will be 4ma. So in case of any surge, the valve will receive a low signal and it will open the valve. Initially, the compressor will be with the valve at 100% open and after that, the valve characteristics of 100% open must be removed from the compressor operational region, while the startup of the compressor. The valve must be sized almost 2 times the maximum surge point flow rate and an oversized valve won’t operate properly.