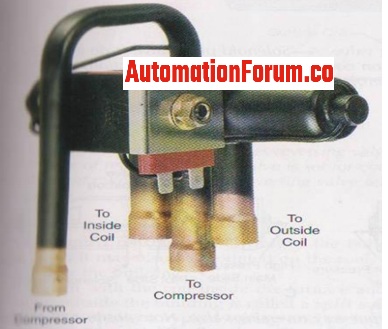 A reversing valve can be seen in a heat pump, because of its ability to reverse the direction of the refrigerant flow. This would allow a single vapor compression system to be used to provide both heating and cooling. The liquid refrigerant must be pumped to the heat transfer coil which can provide cooling, hot vapor must be pumped to the coil and this would reject the heat. So in order to do this process, a reversing valve is used in a heat pump. These valves can be operated automatically, manually, or electrically. These valves are used in heat pumps in order to reverse the flow of refrigerants. The operation of this valve is by the movement of one valve stem, and this stem would open and close many ports in one valve body. The operation of this valve can be manual or electrical. These valves are mostly used in tonnage conditioners such as window units and other air-to-air systems.

What is a heat pump reversing valve?

A heat pump reversing valve is an electromechanical four-way valve and it is used in a heat pump to reverse the flow of the refrigerant and the change in the flow direction of the refrigerant is done with the help of an electrical magnet. Many companies are manufacturing reversing valves but all of these valves have the same general configuration. This four-way valve is capable to change the refrigerant cycle, it can be changed to the cooling mode in summer and heating mode in winter.

A solenoid-operated reversing valve can be described as a four-way pilot valve and it is used in heat pumps. This type of reversing valves can be used for unitary, split systems, and window-type heat pump applications. The inversion of the cycle is done with the help of a solenoid pilot valve and this solenoid valve would trigger the valve sliding and thus the flow direction of the refrigerant is inverted.

What is the need for a reversing valve?

The major part of the valve is a cylinder which has a sliding piston that moves across the openings of three tubes and the center tube will be a suction connection to the compressor. The two outer tubes will be connected to the indoor or outdoor coils. The single tube on the opposite side of the cylinder is the discharge connection from the compressor. The small cylinder to which the solenoid coil is attached is a pilot valve and its purpose is to relieve the pressure of the refrigerant on the cylinder ends and this would cause the movement of the piston.

What are the problems that could cause in a reversing valve?

So if the valve is not able to reverse properly it doesn’t mean that the valve is faulty and this failure can be caused by other problems too. Physical damage in the reversing valve could be a problem, problems in the electrical system can also cause this and this could also happen due to the problems in a refrigeration system.

What is a deluge valve and what is the need for a deluge system?

What is a float valve and how does it work