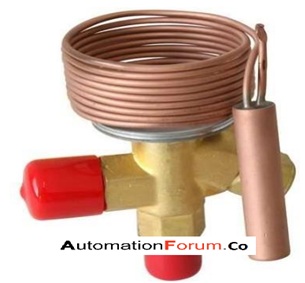 Capillary tube can be considered as an expansion device, this device is also known as a metering device it is a throttling device and it is used in air conditioning and refrigeration systems. This device is a fixed restriction type device. It is a narrow tube that connects the conductor directly to the evaporator. So instead of an orifice, a length of small diameter tube gives the restrictive effect, which is the same as the orifice. Capillary tubes are small diameter tubes the inside diameter of the capillary used in refrigeration is generally about 0.5-2.28mm which means they are very small. It can create a greater pressure drop in the refrigerant flow if the capillary tube is long and has a smaller inside diameter.

The capillary tube is a smaller tube with a small inside diameter, mostly it has diameter of about .5 to 2.2mm and it is used in the domestic refrigerant, deep freezers, water coolers, and air conditioners. Copper is used for the tube construction the pressure drop in the capillary tube is developed due to friction and acceleration. The construction of the capillary tube is really simple. They have no moving parts and directly connects condenser and evaporator. The length and diameter of the tube is depended on the required mass flow rate and pressure drop. The capillary tubes are coiled to many turns so that it would only use less space. Capillary tubes are not capable to adjust to load change. They are mostly used where the load is relatively constant with no large fluctuations. Small-bore size tube can get blocked with metal particles or even with high viscosity oils. So mostly a strainer is used at the inlet to the device. The tube of this device is selected with proper length and bore so that it can maintain the required pressure differential between the condenser and the evaporator.

The capillary tube will control the refrigerant flow by the pressure drop across it in a refrigeration system. The diameter and length of the tube would determine the flow at a given pressure. It won’t maintain evaporator pressure or superheat. It doesn’t have any moving parts so there is no wear out. They are used when the load is relatively constant.

What are the advantages of the capillary tube

What are the disadvantages of the capillary tubes

What is air valve and how to install air valve

What is Speed Limiter on Shutdown Valves?