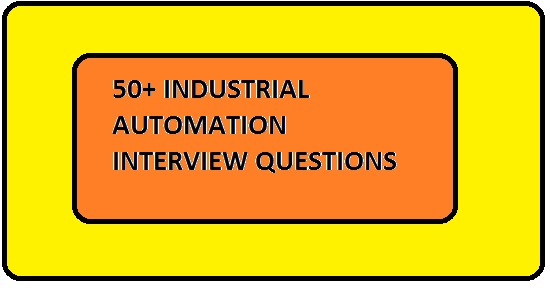 1.What are the major functions of a supervisory control system?

A. There are three major functions for a supervisory control systems and they are

A. Automation is a process that can reduce human efforts, we can see the use of automation in many industrial applications. The machines in a factory can be controlled by using automation.

3.What are the functions of a production control system?

A. The product control system does the scheduling of the process, and it also does the inventory and maintenance management.

4.What are the types of control systems that is used in automation?

A. In automation, there are different kinds of the control system and they are

5. What are the major components that is required for automation?

6.How is a PLC different from relay?

7.What is the difference between a DCS system, a SCADA system, and a PLC system??

A. Distributed control system (DCS) is a computerized system used to control industrial processes that span a large geographical area.

8.What knowledge do you have of serial communication protocols??

9. Could you please explain what HMI stands for? What is its function?

A. HMI is the abbreviation for Human Machine Interface. HMIs are designed to facilitate human interaction with machines, especially industrial machinery, by providing a graphical user interface. This might range from a basic display of information to a more complicated interface that enables the machine’s control.

10. What exactly is meant by the term “Internet of Things”? What does this have to do with industrial automation??

A. The Internet of Things, sometimes known as IoT, is a network of physical devices that are linked to the internet and can exchange data. This information can be utilized to automate a variety of operations, including those seen in industrial settings. For example, if a machine in a plant is connected to the Internet of Things, it can communicate data about its performance and maintenance requirements with other machines and human operators. This data can then be used to improve the overall efficiency of the factory.

A. Any sequential program controller activity is referred to as SCAN. The process generates all updated outputs that match the given inputs.

The ladder diagram shows the SCAN process in action. It takes a total of one cycle to read the input, run the program logic, and update the matching output.

12. What are the different types of sensors used in automation?

A. There are many types of sensors used in automation they are temperature sensors, pressure sensors, flow sensors, and there are sensors to detect the level, conductivity, and density.

A. The 4-20mA signal has the advantage that it won’t drop signal value during long-distance travel, but in the case of the 0-10V, it is different the signal will drop due to the line resistance.

14. What is the use of capacitive sensors?

A. It can sense metallic and non-metallic objects

15. What is the use of inductive sensors?

A. Inductive sensors can sense metallic body without touching it

16. What is industrial automation?

17. What are the benefits of industrial automation?

A. Increased quality and production, industrial automation, and process control have widely reduced the need for human sensory and mental requirements. The manufacturing flexibility is increased and the manufacturing process can be easily converted with the same production line.

A. It is the factor in which the ratings of the parts of the components are decreased so that it will be safe for to use it in critical applications and also it can be used for extreme environmental conditions.

20. What is PID based control system?

A. In a smart transmitter it would have a microprocessor in its electronic section and because of this, it can do remote digital communications and also we can set the device from a remote position.

22. Explain the difference between the two wire, three wire and four wire transmitter?

24. What are the required features for a good automation tool?

A. It should support multiple frame work

It should be able to identify the object

It should be able to test the image and object

It must need better debugging facility

A. The instrument will not be set to 0 degree Celsius because of the industry standards instead of that it will be set to room temperature. Because of this the EMF must be changed and this is called cold junction compensation.

26. What is a pneumatic system?

A. It is a system that uses air to operate the control valves and actuators

27. What are the factors that must be considered while selecting a sensor?

We must consider the sensor measurement limit

The sensor should be capable to detect the smallest change

28. What are the types of temperature sensors?

29. What are the required elements for an automation system?

30. What are the output devices that is used in industrial automation?

A. The output devices such as actuator, drives, control valves, solenoid valves, coils, indicating lamps, etc can be seen in industrial automation.

31. What is the purpose of sensors and transmitters in automation?

A. The sensors can sense the input parameters and the transmitter is used to transmit the electrical signal or it can transmit the out.

32. What is the importance of PLC in industrial automation?

A. A PLC is a computerized industrial computer that is capable to do discreet or sequential logic in a factory environment. It replaces timers, relays, counters, etc.

34. What are the types of pressure sensors that is used for pressure measurement?

36. Explain the function of smart regulator of the PID controller?

37. Name the types of control valves that is used in industries and their functions?

38. What is active and passive sensor?

39. What are the types of sensors used for industrial automation?

A.  There are different types of sensors used in industrial automation and these sensors can be calssified according to their properties.

Classification of sensors based on properties

A. Actuator is a major part of the control system, which is capable to change the output of a microprocessor or control system into a control action.

42. What is hydraulic actuators?

A. This type of actuator uses the fluid power to do the control action in a machine

44. How to check the zero of a DP level transmitter while it is in line?

A. At, first close the isolation valves then open the vent valve on the LP leg and HP leg drain and then check and adjust zero if needed.

45. Explain the difference between the two wire and three wire RTD system?

A. The two wire RTD’s are used for small distance while the three wire RTD is used for long distance.

46. Is there any limitation for level troll?

A. The major limitation of the level troll is that it can’t be used for lengths that is more than 70 inches.

47. What is the purpose of suppression and elevation?

A. Suppression and elevation is used for level measurement if the transmitter couldn’t be installed to the zero levels of the tank

48. If a displacer has hole in it while in line what could happen?

A. There would be only minimum output

49. If the displacer has fallen down while in line then what could happen?

A.  Then the output will be maximum

50. Explain the interface level and how can we calculate it?

A. If a tank is filled with two liquids that have two different specific gravities and this level measurement is the interface level.

It can be calculated by the formulae DP= H (D-d)

51. What is plant automation?

A. in industrial automation systems, the technical process would contain many multiple subprocesses and it can be seen in the entire plant.

What is a piezoelectric sensor?