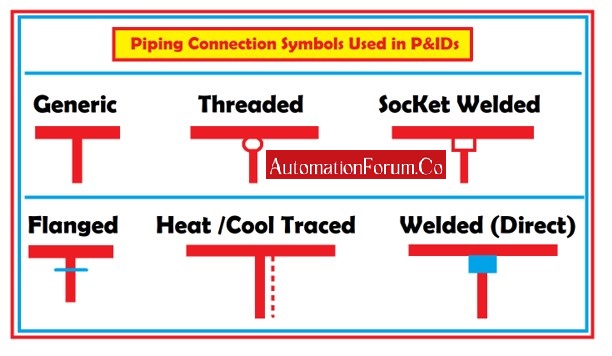 In this article, we have shown some symbols used in P&ID.

A waveguide governs or controls a wave.

It is known as an electromagnetic feed line.

This restricts energy transmission to one direction with minimum energy loss without any physical obstruction of a waveguide.

This waveguide is used in microwave communications, broadcasting, and radar installations.

The flow is against gravity by capillary action.

These capillary tubes are very thin.

Rigid material such as plastic or glass is used for making capillary tubes.Globe Valve

A globe valve is a type of valve used for controlling the flow of fluid in the pipeline.

This valve consists of a movable plug element and a stationary ring seat in a spherical body.

A butterfly valve is a type of valve used to control the flow rate of the flowing fluid through a rotating disk as a closing and opening mechanism.

This butterfly valve has a quarter turn valve for about 90 Degrees of rotation the valve gets fully opened or fully closed when the disc is rotated a quarter turn.

These valves allow for quick operation and are cheaper than other valves.

A ball valve is another type of flow control valve which uses a hollow perforated and pivoting ball to control liquid flowing through it.

This valve gets opened when the ball hole is in line with the flow inlet to allow the flow of fluid.

This valve gets closed when the ball hole is pivoted to 90 Degrees by the valve handle to block the flow.

The shut position of the valve is 1/4 turn.

The direction of valve operation may be either clockwise or anti-clockwise.

It is simply called a stop valve.

In an angle valve, the inlet and outlet ports are perpendicular to each other.

It is considered a manual valve because this valve controls or prevents fluid flow.

These types of valves are called diaphragm valves because they consist of a thin, flexible membrane for controlling the flow by opening and closing the valve.

These types of valves consist of two or more ports.

This valve opens by lifting a barrier or gate out from the fluid.

Installation of these gate valves requires very little space along the pipe axis.

These gate valves do not have any obstruction in the flow path when fully opened.

These plug valves have the plug cylindrical or conically tapered in shape.

The flow is controlled by the plugs rotated inside the valve body.

These plug valves are simple in construction.

When the plug has conically tapered the stem and handle are normally fixed at the larger diameter side of the plug.

This type of valve has an on and off function to shut off, allow, or control the fluid flow.

These pinch valves are generally used when the flowing media is required to be completely isolated from the valve’s internal part.

A three-way valve is a valve having three ports called openings.

The connection between these three ports has a spherical metal ball with a cylindrical bore called an opening to allow and control the flow of media.

There is another mechanism to rotate the ball that directs the flow from one point to another.

These 3-way valves are used for diverting and mixing fluids rather than using multiple 2-way valves.

These valves are cost-effective.

These valves can mix fluids from more than one inlet port.

A pressure regulator is another type of valve for controlling the fluid pressure to the desired value.

These use negative feedback from the controlled pressure.

These pressure regulators are used only for gases and liquids but not for solids.

This is an integral device with a pressure setting, a restrictor along with a sensor.

A check valve is commonly known as a one-way valve.

This is a unidirectional valve because this valve allows the flow in only one direction.

The primary function of a check valve is to prevent the backflow of fluid in the system.

These check valves are cheap.

This valve acts as a fail-safe valve.

This valve automatically releases the pressure when it exceeds the above-designed preset valve.

It is also called a pressure relief valve.

Solenoid valves are a type of final control element.

The piston valve is a device for controlling the fluid motion in a pipe or tube through the linear motion of a piston within a cylinder chamber.

This valve contains a piston rod that blocks the output when the valve is pressurized and a volume of air behind the piston.

When the pressure gets released the piston is pushed back by the force of the input pressure.

An electric motor is a device that converts electrical energy into proportional rotating mechanical energy.

These electric motors are operated by the interaction between the magnetic field of the electric motor and the winding current to generate force in the form of torque applied on the motor’s shaft.

It is an electrically operated valve that controls how hydraulic fluid is sent to an actuator.

These valves provide precise control of the position.

The valve opens upon the failure or loss of an energy signal called Fail Open (FO).

The valve closes upon the failure or loss of an energy signal called Fail Close (FC).

In an event of power failure, the valve remains in the locked position. The fail lock is known as fail secure.

The failure last in a control valve means when the valve loses its driving force and the valve stem remains in its previous position.

These valves may be locked at their previous position afterthe failure of the air supply.

A pressure vessel is a huge container that is designed for storing fluids such as gases or liquids at a pressure considerably different from the ambient pressure.

A centrifugal pump is a mechanical device that is designed for transferring fluid from one place to another place utilizing impellers.

A positive displacement pump lifts the fluid by surrounding it in a fixed volume and moving it mechanically through the system.

The action of the pump is cyclic and can be driven by pistons, screws, gears, rollers, diaphragms, or vanes.

A single-stage reciprocating air compressor works using the force of a piston and pressure-sensitive valve.

This compressor is designed for only one cylinder to compress air with a single piston stroke.

In this compressor, the air is compressed only one time.

To compress the air, the cylinder is connected to a power supply to provide the required force.

This dual-stage compressor is ideal for most demanding industrial applications.

These are much stronger than single-stage compressors and can handle large pressure and large capacity.

In this compressor, the air is compressed twice to raise the pressure.

This compressor compresses the air on both the up stroke and the down stroke of the piston.

What Does Multimeter Mean?

Essential Functions of Instruments in a P&ID

What is a process flow diagram?