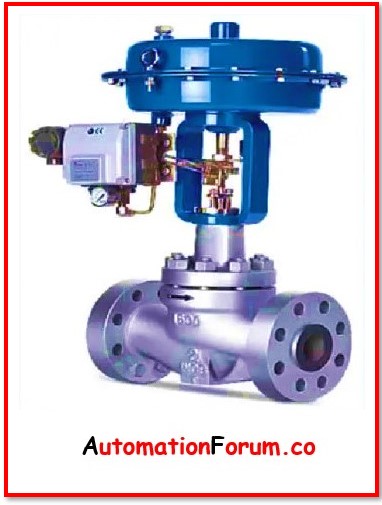 The control valve is a device meant to control the flow rate or flow direction of the fluid in the process.

It is referred to as the final control element. This control valve will adjust the flow passage as directed by a signal controller to modify or control the flow rate.

The basic and most common terminologies for understanding the control valve applications are discussed below.

But in some cases these terminologies might be confusing but refer to the definite components, devices, and processes.

An actuator is a pneumatic, hydraulic, or electrically powered device meant to supply force and motion for the closing and opening of the valve.

The bench set of the control valve is defined as the maximum pressure required for stroking the valve actuator to the rated valve travel from a fully open 100% position to a fully closed 0% position without any valve forces.

The closure member in the control valve is the movable part that is positioned in the flow path to modify the rate of flow of fluid flowing through that control valve.

Some of them include:

This erosion-resistant trim is a valve trim that has been designed with special geometry and surface materials to resist the corrosive effects on the controlled fluid flow.

The failure mode in the valve is the position in which the valve closure member of the valve is moved when the source of actuating energy fails.

The following are the basic types of valve failure modes

The fail-safe is the property of a particular control valve and its actuator causes the closure member of the valve to fully open, fully close, or remain in an existing state when the source of actuating energy fails.

The fail-safe action sometimes demands the use of auxiliary controls that are connected to the actuator. Here the control valve design must comprise the fail-safe action for the plant and personal protection in cases of emergencies or disasters.

It is the region in the flow stream near the orifice where the diameter of the stream is less, and the velocity of fluid flow is at its maximum. Even the static pressure and the cross-sectional area of the fluid is at their maximum.

Throttling is defined as the action of a control valve to control the fluid by adjusting the position of the closure member. The variable pressure drop across the control valve occurs due to throttling action.

Valve travel is the movement of the closure member from the fully closed position to the fully open position.

The valve gain is the relationship between valve travel and the flow rate through the valve. It is described by means of a curve on a graph expressed by an installed or inherent characteristic of the valve.

A valve is said to have dual seating when it uses a flexible material or composition material such as TFE, Kel-F, or Buna-N, etc. for primary sealing and secondary sealing (metal to metal seat).

The output signal is inverse proportional to the set point in the case of the reverse-acting positioner.

It is considered as the flow of fluid in the direction opposite to the standard direction. The pressure drop is higher during reverse flow. Here the rotary valves are viewed as bi-directional control valves.

The stem guide is a bushing that is fitted closely to the valve stem and aligned with the seat.  Stem guiding in the valve is the most essential to minimize the packing leakage.

It is the pressure supplied at the inlet port of pneumatic instruments like actuators, controllers, positioners, or transducers. The commonly used supply pressure for the instruments is 3 to 15 psig.

The seat leakage in the control valve is the quantity of fluid passing through it when the valve is in the fully closed position with the specified temperature and differential pressure.

The seat leakage class categorizes the leakage tolerance for various valve trims.  And this was established by ANSI B16.104.