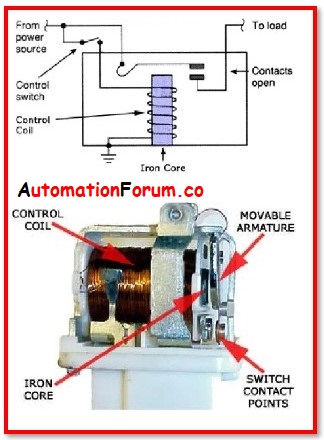 What is a Relay?

Relays are switching devices that are used to control the flow of electricity, and by extension, the circuit to which it is directed. By managing the current flow through an electromechanical assembly or a solid state circuit, a relay can be used to switch a circuit and activate/deactivate among several connected to it instead of manually turning it on or off. The relay ensures complete electrical isolation between the regulated and control circuits and is operated by a low power signal.

Properties of a Relay:

What is a Circuit Breaker?

An automatic switch known as a circuit breaker is an on-load device created utilising electromechanical techniques to guard against short circuits or damage from power overloads. A solenoid is located inside a circuit breaker and is maintained at a specific voltage level to maintain the balance of the triggering mechanism. The switch is activated and the current flow is stopped when a fault in the circuit, such as an overload or short circuit, is detected. The circuit breaker can be turned back on once the relevant electrical issue has been resolved.

Properties of a Circuit Breaker:

What is an Isolator?

An electrical circuit is isolated from current passing through it using a mechanical switch called an isolator. When necessary for operation, fault discovery, or maintenance operations, isolators are utilised to locally power on and power off machinery. Isolators are employed when there is no load on, not when a machine or system is operating and current is flowing through components.

Properties of an Isolator:

What is inductor? and its types