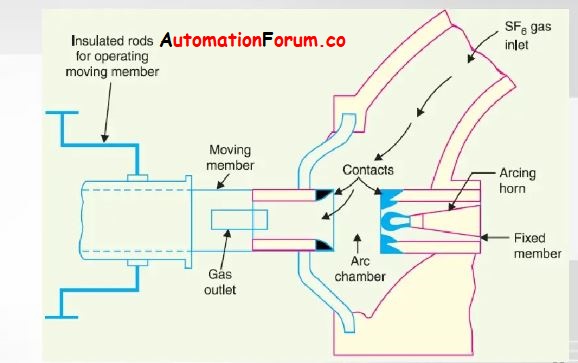 What is Circuit Breaker?

A circuit breaker is a device that may manually or automatically break a circuit under all circumstances, including no load, full load, and short circuit.

A circuit breaker is a device that can perform any of the following functions:

Circuit Breaker classified as two types, they are:

Based on different categories AC circuit breaker have different types:

3.Based on External Design:

4.Based on Interrupting Media:

Electrical power transmission network line are controlled and protected by the high voltage circuit breaker. For voltage higher than the 72.5KV high voltage circuit breaker are used in substation with the support of the protective relays and control panel. The breakers are completely solenoid operated one. The total protective equipment, relays, busbar connection through overload and ground fault are completely earthing. The current value is measured through current transformer (CT).

Ultra High Voltage Circuit Breaker systems breaker operation speed is critical since a lack of stability would be detrimental to the system. It is possible to interrupt for a total of two cycles, or 40 milliseconds. The fundamental contribution of the ultra high voltage circuit breaker is high operating pressure available for fast mechanism operation and guaranteed arc extinction in half a cycle of arcing.

Indoor circuit breakers are intended for use indoors or in weather-resistant enclosures.

They are enclosed in a metal switchgear casing.

Indoor Circuit Breaker can be applied to maximum voltage of 33KV.

Because of their design and location, outdoor circuit breakers can be used outside without a roof. In comparison to the interior breakers, their external enclosure layout is more durable and can tolerate external impact.

3.Based on External Design:

Dead tank circuit breakers are breakers with an enclosed tank that is at ground voltage. All of the insulating and interrupting medium is contained within their tank. To put it another way, the tank is either shorted to the ground or at dead potential. The switching unit is housed in a metal container that has an earth potential. Because the incoming/outgoing wires pass through insulated bushings, current transformers can be installed on them but in live tank circuit breaker separate CT to be installed.

4.Based on Interrupting Media:

Other than the above different types of circuit breakers, based on their properties, interruption and application of uses, breakers are explained in detail as:

In air blast circuit breaker, as an arc cooling medium, a high-pressure air blast is used. The contacts are opened in response to the opening of the blast valve, which creates an air-blast flow. The arc is cooled by the air blast, which also sweeps the arcing products into the atmosphere. This causes the dielectric strength of the medium between the contacts to rapidly grow, preventing the arc from being re-established.The arc is finally extinguished, interrupting the current flow.

The extinction of the arc is aided mostly by two processes:

There are two types of Oil Circuit Breakers based on the quantity of oil used, they are tabulated below:

Oil circuit breakers are used in high-voltage applications such as power grids, substations, powerlines, and transmission and distribution systems, and can handle voltages up to 220 kV.

An air circuit breaker (ACB) is an electrical device that protects electric circuits from 800 to 10,000 amps from overcurrent and short circuits. These are typically utilised in low-voltage applications that are less than 450V. These systems can be found in Distribution Panels (below 450V). At a particular atmospheric pressure, an air circuit breaker is a circuit operation breaker that functions in the air as an arc extinguishing medium. Present environment offers a variety of air circuit breakers and switching gears that are stable, high-performing, and simple to install and maintain. Oil circuit breakers have been replaced entirely by air circuit breakers.

The following are a few of the benefits of using an air circuit breaker:

The following are some of the drawbacks of using an air circuit breaker:

Air Circuit Breakers are used to control the auxiliary and industrial plants of power plants. Industrial plants, electrical machines such as transformers, capacitors, and generators are all protected by them.

A vacuum circuit breaker is a type of circuit breaker that uses a vacuum medium to quench the arc. In a vacuum chamber in the breaker known as a vacuum interrupter, the action of switching on and closing current carrying contacts as well as interrelated arc interruption takes place.

A vacuum circuit breaker is one that uses vacuum as the arc cooling medium in a circuit breaker because vacuum has superior arc cooling qualities and hence provides greater insulating strength. Because vacuum technology was designed for higher voltage uses, but it was not commercially practicable, this is acceptable for most normal voltage applications.

The breaker’s vacuum chamber is where current-carrying contacts and related arc interruption take place. A steel arc chamber is located in the centre of symmetrically positioned ceramic insulators in this interrupter. The vacuum pressure within a vacuum interrupter can be maintained at 10–6 bar. The performance of a vacuum circuit breaker is largely determined by the material chosen for current-carrying contacts, such as copper.

The arc quenching medium is Sulphur hexafluoride gas (SF6). SF6 is a gas with an electronegative charge. SF6 has a great proclivity for absorbing electrons. Arc is formed when contacts are opened in a high-pressure, SF6 gas flow. The gas captures free electrons in the arc and builds up enough insulating strength to extinguish the arc. It is especially useful for high-power and high-voltage applications.

The arc quenching process, as previously mentioned, is a key feature that distinguishes DC circuit breakers from other types of breakers. Because the energy at zero crossing is zero, no arc can be generated at that voltage level, it is easier to break the circuit with an AC breaker. The voltage and current never go to zero in DC. As a result, when the contacts are separated, there is always a lot of voltage and current between them.

HVDC Circuit Breakers are used in: