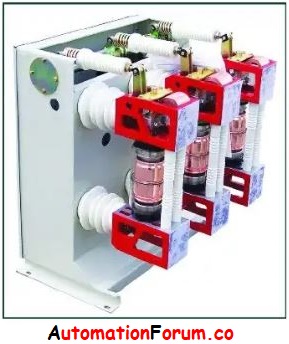 What is a Circuit Breaker?

A circuit breaker is a device that may manually or automatically break a circuit under all circumstances, including no load, full load, and short circuit.

A circuit breaker is a device that can perform any of the following functions:

A circuit breaker is made up of electrodes, which are both fixed and movable contacts. These contacts remain closed under normal operating conditions and will not open automatically unless the system fails. These contacts can be manually or remotely opened.

As a result, the fundamental challenge in a circuit breaker is to extinguish the arc as quickly as possible so that the heat generated by it does not reach a harmful level.

Schematic Diagram of the Circuit Breaker:

The fixed contact in the main circuit is the one that conducts current when it is closed.

Properties of the Circuit breaker:

The basic properties of the circuit breaker are:

When contacts are separated, an arc is formed. As a result, the current can continue. As a result, a circuit breaker’s exact property is to differentiate the arc in the smallest amount of time. The arc provides a low-resistance channel for the current, allowing it to flow freely across the circuit.

But, when a short circuit occurs, however, a large current run through the circuit breaker contacts before the safety mechanism opens them.

Factors are responsible for maintaining the arc between the contacts:

1. Potential difference between the contacts that could exist:

The arc can be deionized by cooling it or physically removing the ionised particles from the gap between the contacts.

They are two types of arc extinction techniques:

Arc resistance is increased over time, reducing current to a level insufficient to maintain the arc. The arc’s resistance can be improved by:

In AC circuits, this method is used to extinguish arcs. After every half-cycle in an AC system, current drops to zero. The arc extinguishes for a brief moment with each current zero. Because the medium between the contacts is made up of ions and electrons, it has a low dielectric strength and is readily broken down by the rising contact voltage, also known as re-striking voltage. If there is a breakdown, the arc will continue for another half cycle.

If the dielectric strength of the medium between contacts builds up faster than the voltage across the contacts at current zero, the arc fails to restrike and the current is interrupted.

The following methods can be used to rapidly raise the dielectric strength of the medium toward current zero:

The following methods can be used to de-ionize the medium:

Circuit Breaker classified as two types; they are:

Based on different categories AC circuit breaker have different types:

3. Based on External Design:

4. Based on Interrupting Media: