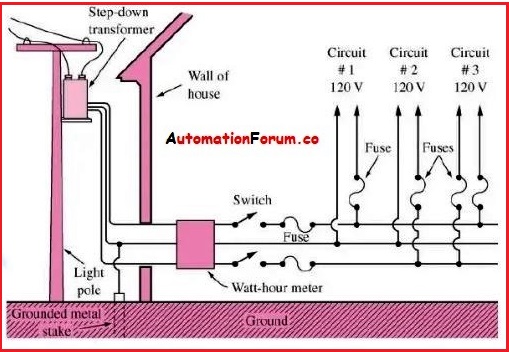 What is Three Phase?

A typical technique of alternating-current electric power generation, transmission, and distribution is three-phase electric power. It is a form of polyphase system that is utilised by electrical grids all over the world to transfer power. Large motors and other heavy loads are also powered by it. Because it utilises less conductor material to transfer electrical power, a three-phase system is usually more cost effective than an identical single-phase or two-phase system at the same line to ground voltage.

What is 3 phase wiring?

In this three-phase electrical wiring installation, most families only connect single phase loads.

As can be seen, the overall load exceeds the single-phase electrical wiring installation limit, demanding the use of a three-phase distribution wiring system.

Single-phase loads (210-230V) are distributed throughout the phases of a three-phase system to balance the load and make the most use of wires and transformers. The three phase wires have the same voltage to the system neutral in a symmetrical three-phase four-wire wye system. The voltage between line conductors is three times the voltage between phase conductor and neutral.

The neutral wire is shared by all currents returning from the customers’ premises to the supply transformer.

The transformers in the diagram below are the same as in the previous one, but one of the secondaries has been tapped at the middle. If the basic voltage is 240 volts, the secondary tapped at the midpoint in the diagram below will give 120/240-volt single-phase power that can be used alongside the three-phase power. The midway where the tap is made is also grounded to a grounding electrode, although this is not illustrated in the image below. This results in a stable system.

A neutral wire is run from the junction of the three secondaries in a wye-connected arrangement. Any circuit connected to all three wires, A, B, and C, has a three-phase voltage of 208 volts. Wires A and B (or B and C, or A and C) have a single-phase voltage of 208 volts. The voltage between the neutral wire N and either A, B, or C would consequently be expected to equal 208 or 104 volts, however this is incorrect. A wye-connected, 208-volt, three-phase system has a voltage of 120 volts between the neutral and any hot wire.

At first inspection, this appears to be incorrect, because if the voltage between wires A and B is 208 volts, the voltage between the neutral wire and either A or B should be half that, or 104 volts, rather than the 120 volts indicated previously. Remember that in a three-phase circuit, each phase’s voltage peaks or reaches its maximum at a distinct moment. The voltage in secondary A is 120 volts at the moment, while secondary B is 88 volts, resulting in a voltage of 120 + 88 or 208 volts across wires A and B. It’s worth noting that 208 = 120√3

In the case of a three-phase wiring system,

The salient features of 3 phase wiring are:

This type of wiring can be applicable in:

Contactor and its working