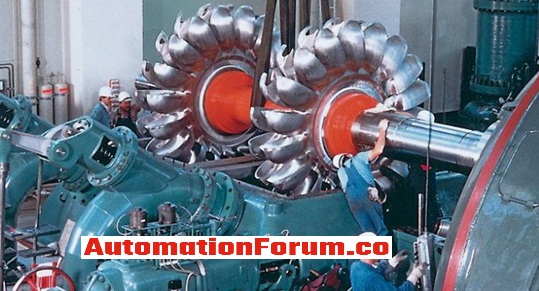 What are the major components of a Pelton turbine?

A large penstock is used to take water to the hydroelectric plant site, and there will be a nozzle at the end of it. The conversion of pressure energy into kinetic energy can be achieved by this. The liquid will flow very fast because of this and this liquid would make an impact on the vanes which are mounted on the runner and thus the turbine rotation would take place. There is a sphere in this and it would control the amount of water that reaches the vanes, the sphere would move backward and forward to control the amount of water.

The runner is the turbine rotor, it is in a circular shape and consists of a certain number of cup-shaped buckets. So as we can see in the below image the bucker is in the shape of cups and the buckets are divide by a barrier and it is called a splitter, so when the water comes in contact with the splitter then the splitter would separate it into two parts and this splitter water goes through both sides of the vane and thus the end thrust is reduced in the bearing and in the shaft.

This part is used to control or prevent the splashing of the water, the casing encloses the runner. The casing would also prevent accidents, basically, the casing is the outer-covering of the turbine. The casing could be made of cast iron or from fabricated steel plates.

This is used to stop the runner within less time, so while the movement of the sphere is in a forward, direction the nozzle will be completely closed. So because of this the amount of water that reaches the runner will be none. The runner would revolve for a long time because of inertia. So in order to stop the runner, a small nozzle would direct the jet of water to the back of the vanes, and this water is called a breaking jet.

How does a Pelton wheel turbine work?

The above image shows the operation of the Pelton wheel, water from the reservoir would reach the turbine through the penstock. A penstock is a solid pipe which would take water from the reservoir and it would transfer the water to the turbine at high speed. So while the water reaches the turbine traveling from the reservoir to penstock and when it comes out through the nozzle then the energy will be kinetic and not potential. Because of this conversion of the energy the water from the nozzle will be in the form of a jet and then it would come in contact with the vanes of the turbine. The jet water would create a great impact on the turbine and this would cause the movement of the turbine. The turbine is mounted on a shaft and there will be mechanical energy in the shaft and the shaft will be coupled to a generator and it would convert the mechanical energy into electrical energy and thus electricity is produced. In order to create more power, we can use two Pelton wheels in a single shaft or two water times to a single Pelton wheel.

The variation in the water momentum would create an impulse on the Pelton wheel blades. The rotation of the Pelton turbine would take place due to the torque which is created by the impulse. So if the impulse is good then the output of the Pelton turbine will be good too. So in order to achieve this change in the momentum of the water stream must be maximum. This can be achieved by diverting the water stream to the opposite direction which strikes the vanes.

What is the need for governing mechanism in a Pelton wheel?

The turbine speed should be maintained constant and it should be maintained so that the generator which is coupled to the turbine shaft would run at a constant speed during the varying load conditions. If the turbine load decreases then the water supply should be cut off, and this will be done by closing the nozzle. The sudden closure of the nozzle can cause excessive water hammers. In order to avoid the water hammer, the nozzle will be closed slowly and some of the water that comes out of the nozzle will be deflected from the bucket in a movable steel plate and it is a deflector. There will be variations in the turbine speed if there is any change in the load and this turbine is linked to the generator. The generator load would change according to the power consumption. So if the load is high then the turbine speed will be very low. In order to keep constant speed in a turbine spread-head mechanism is used. The spread-head can vary the speed in the nozzle and the spear rod movement is controlled by the governing mechanism.

What are the types of Pelton wheel turbines?

The horizontal arrangement Pelton wheel is used in medium and small-sized turbines and would mostly have one or two jets. The vertical Pelton has big wheels and it has many jets, these jets are distributed symmetrically around the turbine in order to balance the jet force.

What are the factors that must be considered while selecting a Pelton wheel?

What are the advantages of the Pelton wheel turbine?

What are the disadvantages of the Pelton wheel turbine?

What are the applications of Pelton wheels?

How to do the troubleshooting and testing of a load cell?

What is an energy meter?