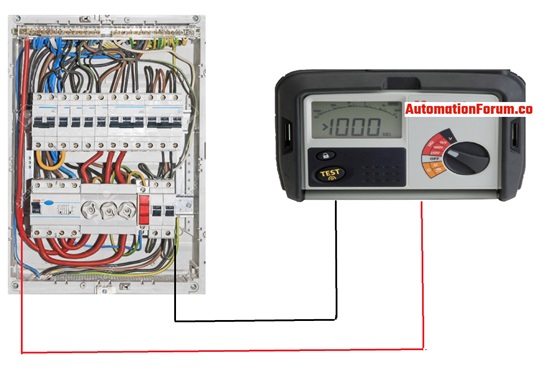 How to check if the megger is working or not?

The black probe in the probe must be connected with a clip and this clip should be connected to the earth of the distribution box. Select the 250 range in the megger at this time we can see OL in the display which means that open link. After that connect the red probe of the megger to the neutral bus bar then a value will be displayed in the megger and the value will be in Megha ohms and this shows the insulation resistance. If the megger valve is zero when connected to the bus bar then there is a short.

After that test, check the phase wire of the MCB which is the outgoing wire, place the red probe of the megger in the MCB’s output and we can see a certain value and this will be more than a thousand mega ohms. If the value is zero then there is a short. Now connect the megger’s red wire to the main neutral and the value will be zero because the earth and the neutral are ground.

Phase testing in the DB

Connect the earth probe in the megger to the neutral of the distribution box then short it by using the other probe and the value should be zero which shows that it is in good condition.

Check the phase by using the red probe in the megger and a value will be displayed in the megger’s display which means that the connection is good and if the value is zero then there is a complaint in the circuit. So if there is any short then we should find that line and remove the short.

What is an automatic control system?

Difference between Neutral, Earth and Ground

What is servo motors? How it works?