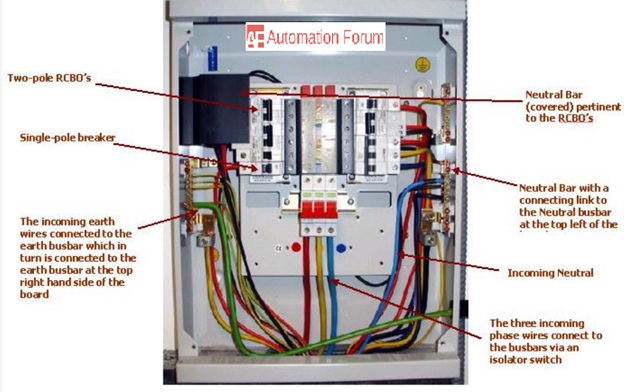 At first, we need to check the distribution board’s wiring, we can see the incoming wiring in the DB, and it will be connected to the MCB input, and from the MCB output it will be connected to the RCCB, so that we can see both MCCB and RCCB in the distribution board. MCB is to do short circuit overload protection and RCCB is used for earth leakage protection. So for a proper system, we need a short circuit, overload, and earth leakage protection. The RCCB phases will be separately connected to the MCCB so the phase wires RYB will be separated and the R phase wires will be tied equally and the same for the other phase and it is the standard way for the DB. In the DB we can see two neutral links and two earth links, so these are the major DB connections.

A DB scheduling is a process in which creating a document and this document will be attached to the DB, this document includes all the details related to the wiring connections like which wire goes to which switchboard and the connected loads all these details will be shown in this document. So if a person who is not familiar with these connections can also find out the faults in an industrial DB.

This is another important factor while setting a DB for an industrial DB it is really important to do the double earthing, earthing will be done in DB body and in earth link.

What are the electrical methods of level measurement?

What is a guided wave radar level transmitter?

How does the Avalanche Diode works?