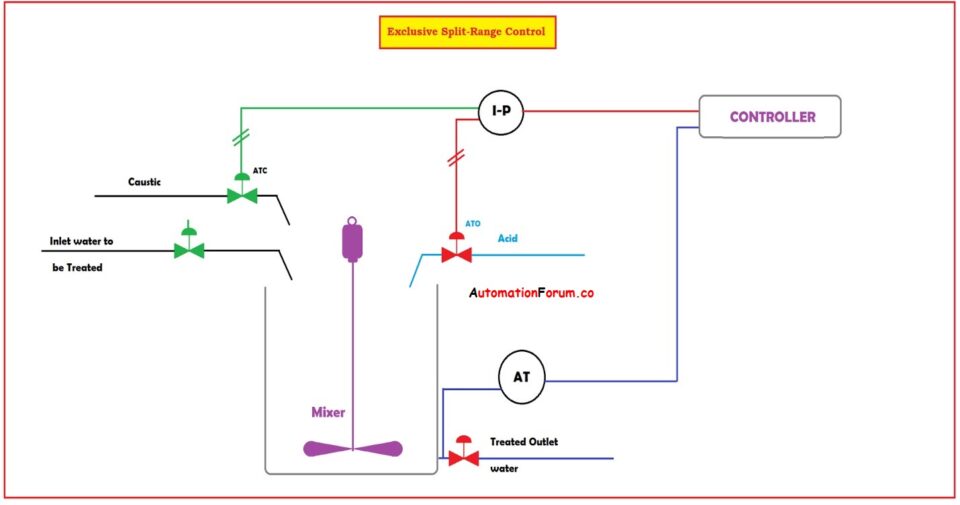 For most control applications in process industries, it is required to have more than one control valve to respond to the single controller output.  The control valves must be configured to follow the control instructions issued by a particular controller.

Control valves are said to be split ranged or sequenced and configured to follow the command of a single controller.

The various modes of sequencing are employed in Split-ranged control valves.

What are the common modes of control valve sequencing?

In the process industry, this involves some modes of control valve sequencing are

This split range control can be observed in a standby situation, where the primary valve halts operation due to some problems the same operation is carried by the other valve called the secondary valve.

A complementary split-range control is observed in the case of an agitator tank where the mixing of two different fluids is carried out.

Let us consider an example of mixing base and pigment liquids together to form coloured paint.

The below table represents the relationship between base and pigment valve opening for a particular task issued by the single controller output.

The behavior of valve sequencing in exclusive split-range control is to have an “EITHER OR” throttled path for process fluid. Here the process fluid will flow through only one valve at a particular instant of time but not through both valves simultaneously.

In this type of split-range control when the output signal of the controller is 50%, both the acid valve and caustic valve remain fully closed.

When the output signal of the controller is 100% only one valve will open and another valve will close fully. And vice versa.

Let us consider an example of a neutralization process in which the reagent is fed to bring the pH of the process liquid close to neutral by the addition of either acid or caustic.

The working of Exclusive split range control is as follows.

The operating range of the acid valve and the caustic valve is as follows.

The relationship between valve openings for each control valve and the controller’s output is shown in the below table.

To expand the operating range of flow control of some kind of fluid above the range that a single control valve will deliver.

This type of control technique uses two valves one is the small acid valve and another one is a large acid valve.

Let us consider an example of controlling the pH of the incoming fluid.

When the pH of the incoming fluid is high this must be neutralized with the proper mixing of acid to control the pH to the desired set point. The pH analyzer AT is used to measure the pH of the inlet water.

When the controller output reaches 100% the large acid valve opens and small acid valve is fully closed to ensure that the pH of the incoming water is neutralized.

The pH of an aqueous solution is defined as the negative logarithm of its hydrogen ion concentration.

What are acid, neutral, and base?

What is Speed Limiter on Shutdown Valves?