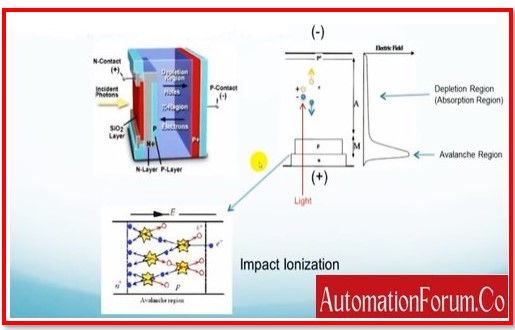 What is an Avalanche diode?

A reverse breakdown region-operating diode is referred to as an avalanche diode. The fundamental purpose of these diodes is to break precisely at a reverse voltage without being damaged. Once these diodes are linked in series, they can be used in high voltage, inductive, protective circuits. An avalanche diode will last a lot longer than a typical diode. Therefore, reliability can be increased by utilising these diodes in particular applications.

Semiconducting and insulating materials both experience avalanche breakdown. It is a method of multiplying electric current that enables very high currents to flow through materials or other effective insulators. Once the voltage supply is given beyond the insulating material that is sufficient to speed up free electrons once they reach atoms within the material, and then they can knock other charge carriers, this type of breakdown can also happen in solids, liquids, or gases.

These diodes are the greatest surge-suppression parts because avalanches happen quickly. An avalanche diode is used in an electric system like a valve to control and safeguard it against an excess of pressure.

Avalanche diodes, on the other hand, are minimally doped. As a result, as compared to a Zener diode, the depletion layer width of an avalanche diode is quite enormous. Due to the size of the depletion region, reverse breakdown occurs in the diode at higher voltages. By carefully regulating the doping level during fabrication, the breakdown voltage of this diode is determined.

Avalanche diodes allow current to flow in both forward and reverse biassing circumstances, unlike PN junction diodes, which can only supply current when coupled in the forward bias condition. It is typically used in situations with reverse bias. The avalanche diode behaves in the forward bias state in a manner that is comparable to that of a typical PN junction diode.

As a result, this voltage is known as the reverse bias voltage when the breakdown at the PN junction occurs. The diode therefore permits the flow of current in this circumstance. Similar to a PN junction diode, this kind of diode has two layers: the P-layer and the N-layer. While electrons predominate in the N-layer, holes are the predominant charge carriers in the P-layer.

When the reverse bias voltage is increased, the minority charge carriers’ ability to absorb energy improves, causing them to travel quickly. Through the collision of these charge carriers with atoms, energy will be transferred toward the valence electrons. These electrons will become free electrons after being cut off from the parent atom.

The difference in current for the applied voltage to the diode is what makes up the VI properties. The Zener & Avalanche breakdown has mixed properties, as shown in the graph above. It has been noted that when a diode is linked in a reverse bias state, both breakdowns will occur.

Avalanche diodes have the following advantages:

Avalanche diode disadvantages include the following:

The following are some applications of avalanche diodes:

The breakdown voltage for diodes is the lowest reverse voltage that causes the diode to conduct noticeably in reverse. Some devices also have a forward breakdown voltage, such TRIACs(Triode for Alternating Current.).

2. What is Depletion Region?

The depletion region, also known as the depletion layer, depletion zone, in organic semiconductors, is an insulating region inside a conductive, doped semiconductor material where the mobile charge carriers have been diffused away or have been forced away by an electric field. Ionized donor or acceptor impurities are the sole elements present in the depletion area.

How Electromagnetic induction can be used to generate electricity