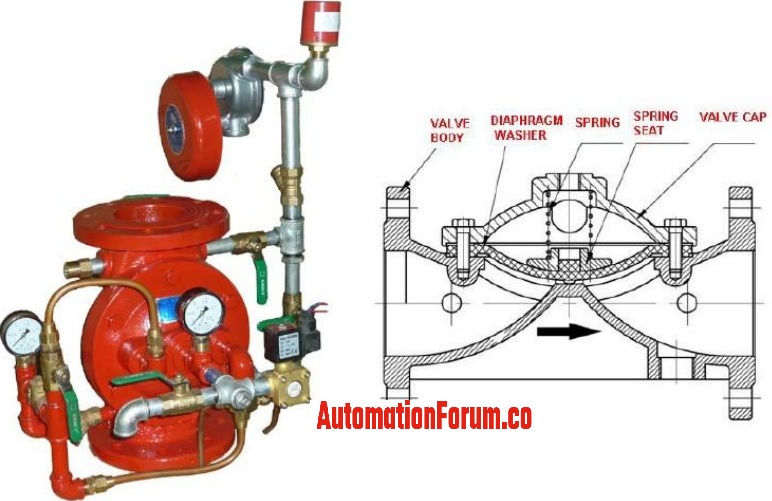 What is a deluge system and why is it used?

How does a deluge system work?

What is a deluge valve?

How to select a deluge valve?

How to model a deluge system?

How does a deluge valve works?

A deluge valve system consists of a control valve, a sprinkler-operated detection system, and also a water supply system. The deluge valve has three chambers and they are all isolated from each other. So if the fire is detected then the top chamber is vented to the atmosphere through the outlet port and thus the top chamber pressure reaches half than the supply system pressure and the upward force lifts the clapper and thus the water will enter into the system.

This type is used in case of fire is because of the rupture of quartzoid bulb on the detection line and the air pressure will be decreased and due to this, the top chamber pressure will be reduced. So in this situation, the upward force of the supply pressure lifts the clapper and thus allows water into the system piping.

In the detection line, there will be a solenoid valve, the detection lines are placed parallel to the water spray line throughout the area of protection. The air pressure can be released by operating the solenoid from the concerned control room.

In this type the operation is done manually from the field by opening the valve which is in the emergency release box.

How to install a deluge valve?

What are the applications of deluge valve or deluge system?

What is a surge tank?

What is a reversing valve?