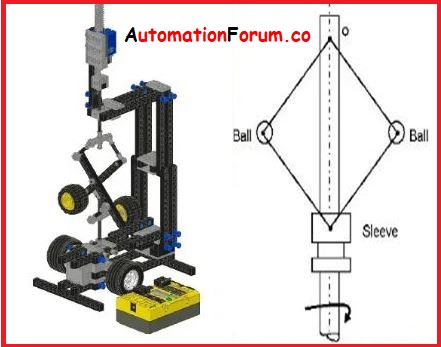 A governor is a device that measures and controls a machine’s speed, such as an engine. The centrifugal governor, also known as the Watt or fly-ball governor, is a classic example of proportional control that employs weights mounted on spring-loaded arms to calculate how quickly a shaft is spinning and then uses proportional control to limit the shaft speed.

Working of a Governor:

When there is a variation in load, the governor’s objective is to keep the engine’s speed within a defined range. The governor’s mechanism should work in such a way that the fuel supply is automatically regulated according to the load required in order to maintain a constant speed.

Governor is classified into two major types. They are:

The centrifugal governor and the inertia governor are not the same thing. Angular and centrifugal forces combine to control the position of the balls and the governor’s operation. It is preferred when a rapid response is required due to its uniqueness.

In addition to centrifugal forces on the balls, inertia governors alter the position of the balls by forces set by an angular acceleration or deceleration of the provided spindle.

The engine-driven centrifugal governor is a fly weight mechanism is coupled to the throttle and operates against a spring in a similar manner to the inertia governor, resulting in practically identical operation. The design and manufacture of a centrifugal governor is more difficult than that of an inertia governor. The centrifugal design, on the other part, is more sensitive to speed changes and hence better suited to engines with large load fluctuations.

The Centrifugal Governor is classified into different types they are:

The porter governor is a Watts governor modified with a central load linked to the sleeve. The load is transferred up and down the central spindle. This added downward force raises the required speed of revolution for the balls to ascend to any pre-determined level.

A gravity-controlled centrifugal governor is a form of Proell engine speed control governor. It’s built similarly to a porter mechanical speed governor. Like the porter governor, it has a central load. The balls, on the other hand, are attached to the extension links in the Proell governor, as indicated in above diagram. The speed of the Proell governor is lower than that of the Porter governor for a known mass of Governor ball and centre load.

The Watt Governor is the most basic type of centrifugal governor. To regulate the speed of his steam engines, watt governor are used, often known as a “flyball governor.” It’s essentially a conical pendulum with a link to a little sleeve. It is made up of two balls that are linked or fastened to the spindle via links or arms. Three options exist for connecting the governor’s arms to the spindle:

The Hartnell Governor is similar to the watt governor in that it supplies a specific amount of fuel to the engine to reduce variations. The Hartnell governor, on the other hand, is made up of a few distinct pieces for accurate operating and high-speed performance. This sort of governor has a spring that helps to exert an additional force on the sleeve. and there is a bell crank lever to support the ball’s rotation and is attached to the governor’s frame, and when these balls rotated, the lever would lift the sleeve according to the speed of the balls rotation. An extra nut is provided above the frame on this governor, which is used to regulate the spring force.

How Governor is used to control speed in turbine?

The governor of a steam turbine is a part of the turbine control system that controls rotational speed in response to changing load circumstances. The governor output signal controls the position of a steam inlet valve or nozzles, regulating the flow of steam to the turbine.

Governors are installed on every steam turbine to control speed under the following conditions:

What is an Emergency shutdown system and what is its importance?