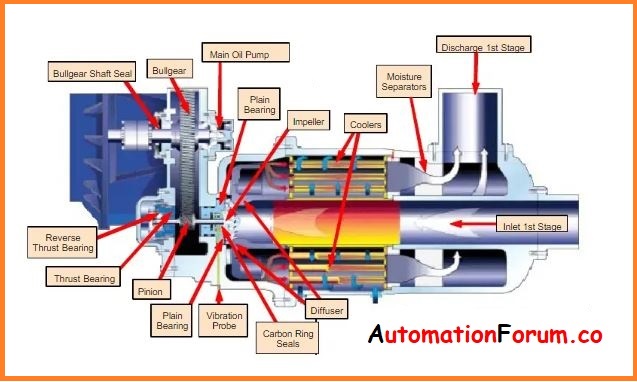 What is a compressor?

Compressor is classified into two major types. They are:

A positive displacement compressor is a device that reduces the volume of air by compressing it through the movement of a mechanical connection. They are classified into different types, they are:

To compress the gas into a smaller area, rotary screw compressors employ two meshed revolving positive-displacement helical screws. These can be either stationary or portable and are typically utilised for continuous operation in commercial and industrial applications.

A rotor with several blades fitted in radial slots makes up a rotary vane compressor. In a larger housing that is either circular or has a more complicated design, the rotor is located off-center. Blades move in and out of slots as the rotor rotates, maintaining contact with the housing’s exterior wall.

The rotating blades produce a succession of rising and falling volumes as a result. Along with piston compressors, rotary vane compressors are among the earliest types of compressors.

A scroll compressor, often referred to as a scroll pump or scroll vacuum pump, is a device that compresses or pumps fluids like liquids and gases using two interlaced spiral-like vanes. Involute, Archimedean spiral, or hybrid curves can all be used for the vane geometry. In the lower volume range, they perform more dependably, silently, and smoothly than other types of compressors. The fluid between the scrolls is frequently trapped and pumped or compressed when one of the scrolls is fixed and the other circles eccentrically without spinning. These compressors have a very high volumetric efficiency due to the minimal clearance volume between the stationary scroll and the orbiting scroll.

A different type of traditional reciprocating compressor is a diaphragm compressor. Instead of using an intake element, a flexible membrane moves to compress the gas. A rod and a crankshaft mechanism work together to move the membrane back and forth. The gas being compressed only comes into touch with the membrane and the compressor box.

The equipment’s maintenance life is influenced by the equipment’s degree of flexing and the material that makes up the diaphragm. Due to the metal’s inability to withstand significant bending without shattering, stiff metal diaphragms typically only pump a few cubic centimetres of volume, but their rigidity also enables them to operate at high pressures.

may withstand deep pumping strokes with a high degree of flexion, their weak construction restricts their usage to low-pressure applications, and when plastic embrittlement develops, they must be replaced.

The huge temperature window for the liquid phase and nearly non-measurable vapour pressures of ionic liquids, along with the limited solubility of some gases (such as hydrogen), allow for the creation of an ionic liquid compressor.

Dynamic compressors are rotational continuous-flow devices where the air is accelerated as it passes through the quickly revolving element, transforming the velocity head into pressure, partially in the moving element and partially in stationary diffusers or blades. They are different types:

Dynamic rotating compressors called axial-flow compressors use arrays of fan-like air foils to gradually compress a fluid. They are utilised in situations when high flow rates or a small design are necessary. Air foil arrays are arranged in rows, typically in pairs, with one revolving and one stationary. The fluid is accelerated by the rotating air foils, commonly referred to as blades or rotors. The stationary air foils, commonly referred to as stators or vanes, slow down and change the direction of the fluid’s flow to get it ready for the next stage’s rotor blades.

In order to maintain the best possible axial Mach number, axial compressors are usually invariably multi-staged, with the cross-sectional area of the gas channel decreasing along the compressor.

A mixed flow compressor stage is created by combining axial and radial components in a mixed flow compressor, also known as a diagonal compressor. Similar to a centrifugal design, the exit mean radius is larger than at the intake, but the flow prefers to depart in an axial rather than radial direction. As a result, centrifugal compressors’ associated relatively large diameter exit diffuser is no longer necessary. Similar to a centrifugal design, the impeller can be manufactured from solid using NC machines.

Allowing a turbulence-generated mixture of air and water to fall into an underground cavern allows the air to separate from the water. The air at the top of the chamber is compressed by the weight of the falling water. Water can emerge from the chamber at a lower level than the intake thanks to a submerged outlet. The pressurised air is delivered to the surface through a hole in the chamber’s roof.

Dynamic axisymmetric work-absorbing turbomachinery includes centrifugal compressors, sometimes known as radial compressors.  They raise the pressure by supplying energy to the fluid that is already flowing continuously through the rotor/impeller. This precise energy input is depicted in the following equation. By slowing the flow via a diffuser, a significant percentage of this energy, which is kinetic, is transformed into enhanced potential energy/static pressure. The rise in static pressure at the diffuser and impeller may be about equal.

In the industrial world, compressors are used to