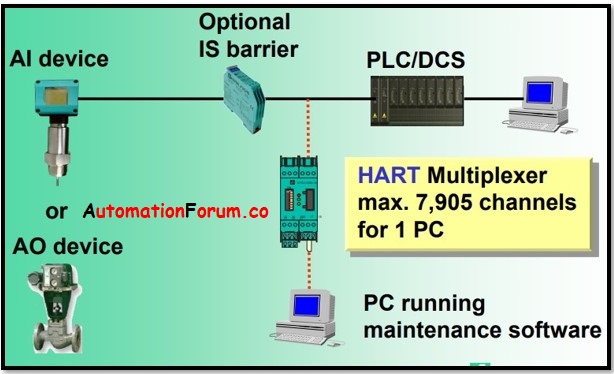 HART is capable to transmit and receive digital signals through Analog wires. Thus it would facilitate the communication between the field devices and the control system such as DCS, or PLC. HART is capable to do hybrid communication, so we can monitor or control the device remotely. Due to the digital networking feature of the HART, we can access the field device or the controller from anywhere in that network. It utilizes the conventional 4-20mA network so that it can be easily used with the existing system as well as in the current system.

What is a HART device?

HART devices are known as smart devices, here the smart refers to signal modulation and rearranging transducer. Smart devices are intelligent transducers that are composed with integrated electronics. This smart device would also have a transduction element and it is also capable to do signal conditioning.

Major functions of the Smart device:

How does HART Communicates or how HART works?

What are the different types of HART network protocols?

In this type, a single pair of wires would be utilized to do the operation and communication takes place digitally.

What is HART Multiplexer?

What are the applications of HART Multiplexer?

•          HART communications can be easily carried out through the Ethernet

What are the factors that must be considered while selecting a HART multiplexer?

What are the different types of HART Communicators available in the market?

What are the advantages of using the HART device?

By utilizing a HART we can determine the basic HART variables such as percent travel, set point, temperature, and supply pressure. These data can be utilized for feedback within the system.

•          It is supported by almost all the industrial devices and suppliers

•          Operational parameters can be easily adjustable

How to specify control valves for process applications

Measurement of the dead band in a control valve