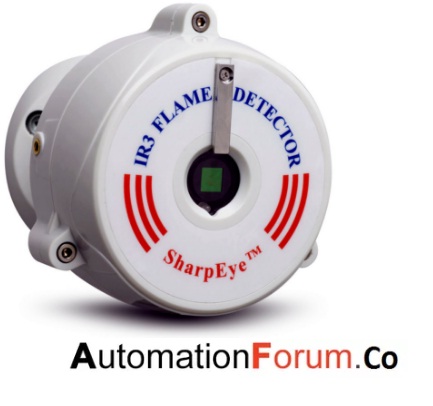 All objects with a temperature greater than absolute zero emit IR radiation. Most IR sensors are broadband detectors (that is, they respond to a wide range of wavelengths). Consequently, they require an optical filter to reduce the response to the wavelength of interest. Carbon dioxide in the Earth’s atmosphere absorbs virtually all of the solar radiation in a range of 4.2 to 4.5 microns. Consequently, a high radiation intensity of 4.2 to 4.5 microns at ground level can only be from a hot body or carbonaceous fire. For this reason, fire detectors  based on the response to this range is only blind solar. Discrimination between hot bodies and fires is achieved by monitoring the characteristic frequency of flame flicker of 1-10 Hz.

IR detectors are virtually unaffected by smoke or oil vapors, do not respond to arc welding as ionizing radiation (for example, non-destructive X-ray test) and are less affected by dirt on the lens than the UV detectors. However, they do not respond to non-carbon flames, such as hydrogen and hydrogen sulfide. The most promising type of IR detector is the single-wavelength solar-blind detector, which responds to radiation in the range of 4.3 to 4.5 microns.

The most common wavelength of interest is 4.35 micron, the carbon dioxide emission band, because burning carbonaceous material produces large amounts of carbon dioxide.

Area of Detection : Cone of sight

1. Sensitivity not impaired (as UV) by less contamination and smoke absorption of radiation.

2. Not affected by welding, X-rays.

Do you want to know more about Working of Flame Ionization Detectors ,UV type fire detectors