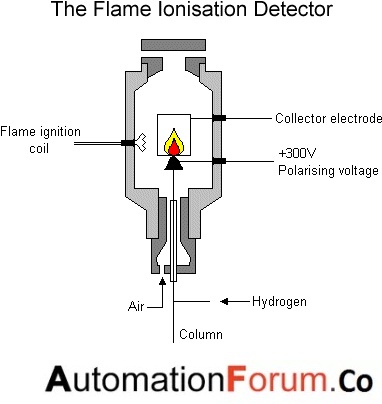 Several detector designs exist for process gas chromatographs. The two most common are the flame ionization detector (FID) and the thermal conductivity detector (TCD). Other types of detectors include the photometric flame detector (FPD), the photo ionization detector (PID), the phosphor nitrogen detector (NPD) and the electron capture detector (ECD). All chromatography detectors exploit some physical difference between the solutes and the carrier gas itself that acts as a gaseous solvent, so the detector can detect the passage of the solute molecules (components of the sample gas) between the carrier molecules.

Flame ionization detectors work according to the principle of ions released in the combustion of the sample species. Here, the assumption is that the sample compounds will ionize inside a flame, while the carrier gas will not ionize. A permanent flame (usually driven by hydrogen gas that produces insignificant ions in combustion) serves to ionize any gas molecule that leaves the column of the chromatograph and that is not carrier gas. The common carrier gases used with the FID sensors are helium and nitrogen, which also produce negligible ions in a flame. The sample molecules that encounter the flame ionize, making the flame more conductive of electricity than it was with only hydrogen and carrier gas. This conductivity causes the detector circuit to respond with a measurable electrical signal.

A simpliﬁed diagram of an FID is shown here:

Hydrocarbon molecules are easily ionized during combustion, which makes the FID sensor suitable for GC analysis in petrochemical industries where hydrocarbon composition is the most common form of analytical measurement. It should be noted, however, that not all carbon-containing compounds are significantly ionized in a flame.
Examples of non-ionizing organic compounds include carbon monoxide, carbon dioxide and carbon sulfide. Other gases of common industrial interest such as water, hydrogen sulfide, sulfur dioxide and ammonia also do not ionize in a flame and, therefore, are undetectable with an FID.