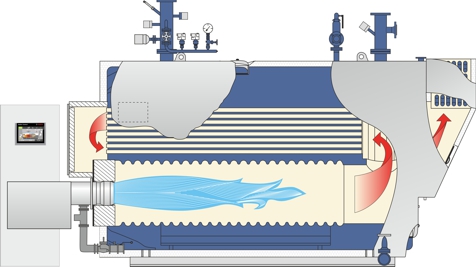 A boiler is used to heat water to steam. To accomplish this a series of tubes are placed in the boiler to confine the water and provide a large heat transfer surface for interfacing with the hot gases of combustion. The water in these tubes is turned to steam. The steam is used in energy conversion purpose. For this the level of the water in the boiler chamber must always be above a particular level and should not overflow. The Boiler drum level control is used to maintain these conditions.

The objective of the control system is to provide steam at a constant pressure, and to do so with a safe minimum cost. The control must provide adequate feed water to exactly compensate for the extracted one as steam and the last one as blowing. Controlling the level is critical because if the level is too low, the drum heats dry and damages the mechanical components. And if the level is too high, the water can get into the steam pipe, possibly damaging the downstream equipment. Hence in level measurement two levels are measured an upper and bottom level are measured.

There are three types of control strategies:

Single-Element control is perhaps the simplest strategy. In this system drum level is measured using a single measurement device and provides a control signal to the feedwater regulator in direct relation to the current operating drum level.

The single-element drum level strategy is only effective for smaller boilers with relatively steady demands and slow to very moderate load changes. The level of the tank is measured and the variable is added to the control system. The control action produced is based only on the level of water in the boiler.

The two-element drum level strategy is suitable for processes with moderate oscillations and load speeds, and can be used in any boiler size. This system uses the two variables, drum level and steam flow to mass balance the demand for feedwater.

Drum level is measured and the error between the desired setpoint and the actual control point is sent to a math summer as one of two process variables. The two-element control also measures the flow rate of the steam from the boiler, according to the need of steam flow rate the boiler speed is increased. The feedback from the steam flow rate and the level measure is compared in the controller to produce a control action. This is two-element control.

In this system the math summer output of the two-element controller is cascaded down to a second Feedwater Flow Controller to act as a Remote Setpoint. The feedwater controller is a fast acting flow controller, which uses feedwater flow as its process variable and steam flow as its setpoint.

Three-element drum level control is ideal when a boiler plant consists of multiple boilers and multiple feed water pumps or where the feed water has variations in pressure or flow. The independent tuning of each controller allows a very precise control of the level of the drum, independently of the steam demand and the influences of the feed water.

This strategy is essential in multiple boilers that share the same power head and supply system, due to variations in the supply water flow available to any boiler, while two or more boilers are in line. This is independent of the size of the boiler. The three element control strategy can easily handle large and rapid load changes because it is matching the mass balance between the steam flow of the boiler and the flow of feed water to it.