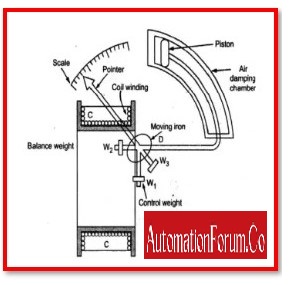 The device used to measure the electric potential difference between two points in an electric circuit is called a voltmeter. It is linked simultaneously. It typically has a high resistance such that it uses very low circuit current. Voltmeters can be used to measure sinusoidal AC voltages as well as DC voltage, however introducing a voltmeter as a measurement instrument into a circuit can interrupt its steady state operation.

What is the SI Unit of Voltmeter?

The volt is the SI unit for electrical potential.

Symbolic representation of a voltmeter:

The two terminals and the letter V in the circle are used to symbolise the voltmeter.

What is the formula of voltmeter?

where V represents the potential difference across a resistance R that a current I is passing through.

The fundamental idea behind a voltmeter is that it needs to be connected in parallel to the device(s) being measured for voltage. A voltmeter’s high resistance value necessitates the usage of a parallel connection. Therefore, if that large resistance is linked in series, the current flow will be virtually zero, indicating that the circuit is now open.

For an ideal voltmeter, the resistance should be infinite, the current drawn should be zero, and there should be no power loss in the device. However, unable to create a material with infinite resistance.

We have several different types of voltmeters, most of them are based on the construction principle:

Depending on the output it is classified as:

Depending on the measurements it is classified as:

The PMMC Voltmeter operates on the principle that a current-carrying conductor is placed in a magnetic field and that force is applied to the conductor as a result of the current. The measurement and voltage cause a current to be induced in the PMMC instrument, and this current causes the meter’s pointer to deflect.

Rectifier Voltmeters are used to measure AC or DC. A PMMC meters that measures rectified voltage that is attached across the bridge rectifier must be connected in order to conduct DC measurements. It Can be applied frequently. Most ranges have a steady scale.

The induction voltmeter is built similarly to the induction ammeter, with the exception that its winding is wound with a lot of turns of tiny wire. Split phase windings are created by connecting a high resistance R in series with the winding of one magnet and an inductive coil in series with the winding of the other magnet. This is done to create split phase windings because the device is connected across the lines and only carries a small amount of current (5-10mA).

The term “moving iron instrument” refers to the MI voltmeter. This voltmeter is used to measure both AC and DC voltages. The deflection is directly inversely proportional to the coil voltage in this kind of voltmeter. Two categories of moving iron voltmeters available.

The AC voltage is measured using an analogue voltmeter. Through a pointer that is fixed to a calibrated scale, it shows the reading. The torque exerted on the pointer determines its deflection. The measurement voltage has a direct relationship with the size of the developing torque.

A device that can provide the output voltage without deflection by just indicating the value is the digital voltmeter. It is a particularly effective tool to measure voltage since it entirely removes parallax error and allows for high-speed reading as well as the ability to store the voltage measurement in memory for subsequent analysis. The value is measured using the same circuit configuration in general, but instead of being used to deflect the pointer, that value is supplied to the analogue to digital converter and displayed as a digital value.

The device known as an AC voltmeter is used to measure the AC voltage between any two points in an electric circuit. Rectifier-based AC voltmeters are those that use rectifiers as its primary component. Only DC voltages are measured by the DC voltmeter. These two procedures must be taken if you want to use it to measure AC voltages.

Step 2: Calculate the output signal of the rectifier’s average or DC value.

By adding the rectifier circuit to the fundamental DC voltmeter, it transforms into a rectifier-based AC voltmeter.

An instrument called a DC voltmeter is used to determine the DC voltage between any two points on an electric circuit. The Permanent Magnet Moving Coil (PMMC) galvanometer can be used as a DC voltmeter by connecting a resistor in series with it.

Series multiplier resistance, or simply multiplier, is another name for the series resistance that is utilized in DC voltmeters. In effect, it restricts the flow of current through the voltmeter to keep the meter current from going above the full-scale deflection value. This DC voltmeter must be placed between the two places on an electrical circuit where the DC voltage is to be determined.

Voltage is displayed immediately as numbers on a digital voltmeter. Some of these meters have multiple significant numbers for the voltage values that can determine. Maximum ranges for practical laboratory voltmeters are 1000 to 3000 volts (V). The majority of voltmeters used in industry have many scales with powers of 10 increasing, such as 0-1 V, 0-10 V, 0-100 V, and 0-1000 V.

Why is the resistance on a voltmeter so high?

Since the voltmeter detects the potential difference between the two points of the circuit, it is built with a very high internal resistance. The measuring device’s current is unaffected by the voltmeter.

Why is the voltmeter connected in parallel?

The voltmeter is built in a way that ensures a high internal resistance at all times. When it is connected in series with the circuit, the amount of current that flows as a result of the measurement voltage is reduced. As a result, interference with the voltmeter’s reading.

What is a voltmeter is used for?

A voltmeter is a device that measures the electrical potential difference between two locations in an electric circuit. Digital voltmeters use an analogue to digital converter to display voltage as a numerical value; analogue voltmeters move a pointer across a scale in proportion to the voltage of the circuit.

The Voltmeter has several applications, such as:

WHAT IS ELECTROMAGNETIC RELAY & EXPLAIN ITS FUNCTION