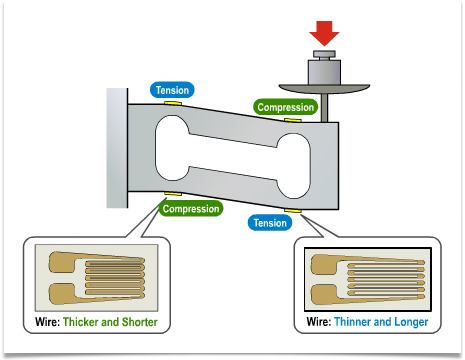 Load cells are used in different applications to measure force or weight. We can take the strain gauge and the Wheatstone bridge theories and use them to build a Load Cell. As the weight is placed above the line, the length of the line will decrease. this line will also be “fat,” or stick out.

The Load Cell that we made has resistance values that represent our four strain gauges. Because in our Load Cell, all strain gauge resistances are the same. Using Ohm’s Law we configure the drop voltage at points 1 and 2. Each branch contains 350Ω + 350Ω = 700Ω Resistance. The current flow in the branch and the branch voltage are divided by branch resistance

Two strain gauges are placed opposite each other to respond proportionally to the change in length. Two other measuring devices are placed on the opposite side of the line and respond to changes in the line’s protrusion.

Since a pair of strain gauges mounted on them the wire becomes shorter the wire diameter becomes larger and reduces their resistance. The other pair of strain gauges is positioned that will extend the cable, thereby reducing the diameter and increasing the wire resistance. If we hang the same weight from the bottom of the line, instead of pressing the line, we will place tension/stress on it. Line and strain gauges will act in the opposite direction but still in the same amount of stretching and pressing the cable. We can measure the wire strain to the Wheatstone Bridge configuration.

What is a smart transmitter?