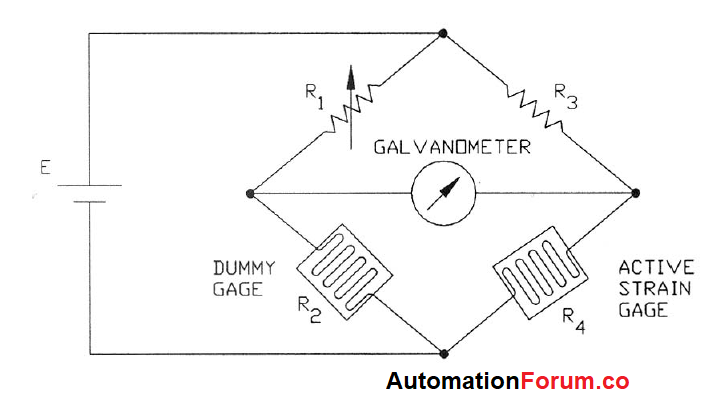 A Wheatstone bridge is used to detect electrical resistance changes. This circuit is used in signal conditioning. The circuit works like this: Four resistors are wired in the manner shown, with a galvanometer as a very sensitive current detector.

A voltage source, E, produces two opposing current flows in the legs of the resistance bridge as shown. If the resistance values are adjusted properly so that I1 equals I2, it is possible to cause a net current of zero to occur through the galvanometer. This happens only if the following resistor ratios are maintained.

There are virtually an infinite number of resistor combinations that will satisfy the conditions above. In reality, there are certain desirable combinations of resistors that work better than others for strain gauge applications, but that is beyond the scope of our discussion.

In reality, the temperature will affect the internal resistance of the strain gauge. This is one of the more notable and undesirable characteristics of a strain gage. So how can we nullify the effects of temperature? Which is shown below:

What is a smart transmitter?