What is Karman Street ?

A fluid flows past an object in the flow,alternating Karman Vortices are shed on the downstream side.

A vortex meter comprises a meter body with a shedder bar in the flow stream. 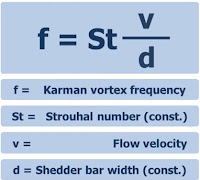 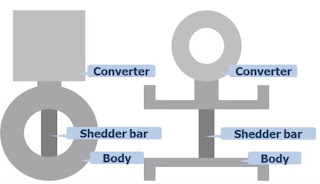 A vortex meter generally consist of a meter body.A shedder bar with sensor and converter electronics.
Sensor :-
A piezoelectric sensor is used to measure the vortex frequency. Two piezo electric sensors are embedded in the shedder barand isolated from the process fluid. 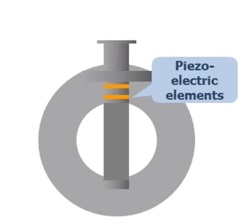 Relationship of Flow,Force and Output
Flow hits the shedder bar ans separates,and due to shape of the bar,forms vertices.
The vortices creates an alternating pressure differential across the bar.The shedder bar is physically stressed towards the low pressure side.
A piezoelectric crystal converts these mechanical stresses to electrical pulses.
The sensors are hermetically sealed and not in contact with the process.
Fluids flows into the meter body and hits shedder bar.
Karman vortices are generated at the edge of the shedder bar.
Karman vortices generates a lift force in the shedder bar.
These stresses on the shedder bar are sensed by the piezoelectric sensors which generates an output signal.
The signals from the piezo-sensors are further processes by the amplifier.
These signals are continuously generated by the alternating lift forces due to karman street effect. 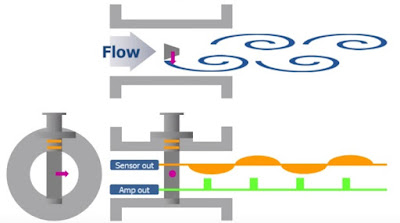 What is K factor?
The K-Factor represents the flow characteristics of the flowmeter.
It is determined during the factory calibration and also set in the parameters.It is also indicated on the instrument name plate.
K- Factor = Number of Pulses / Unit volume.
previous post