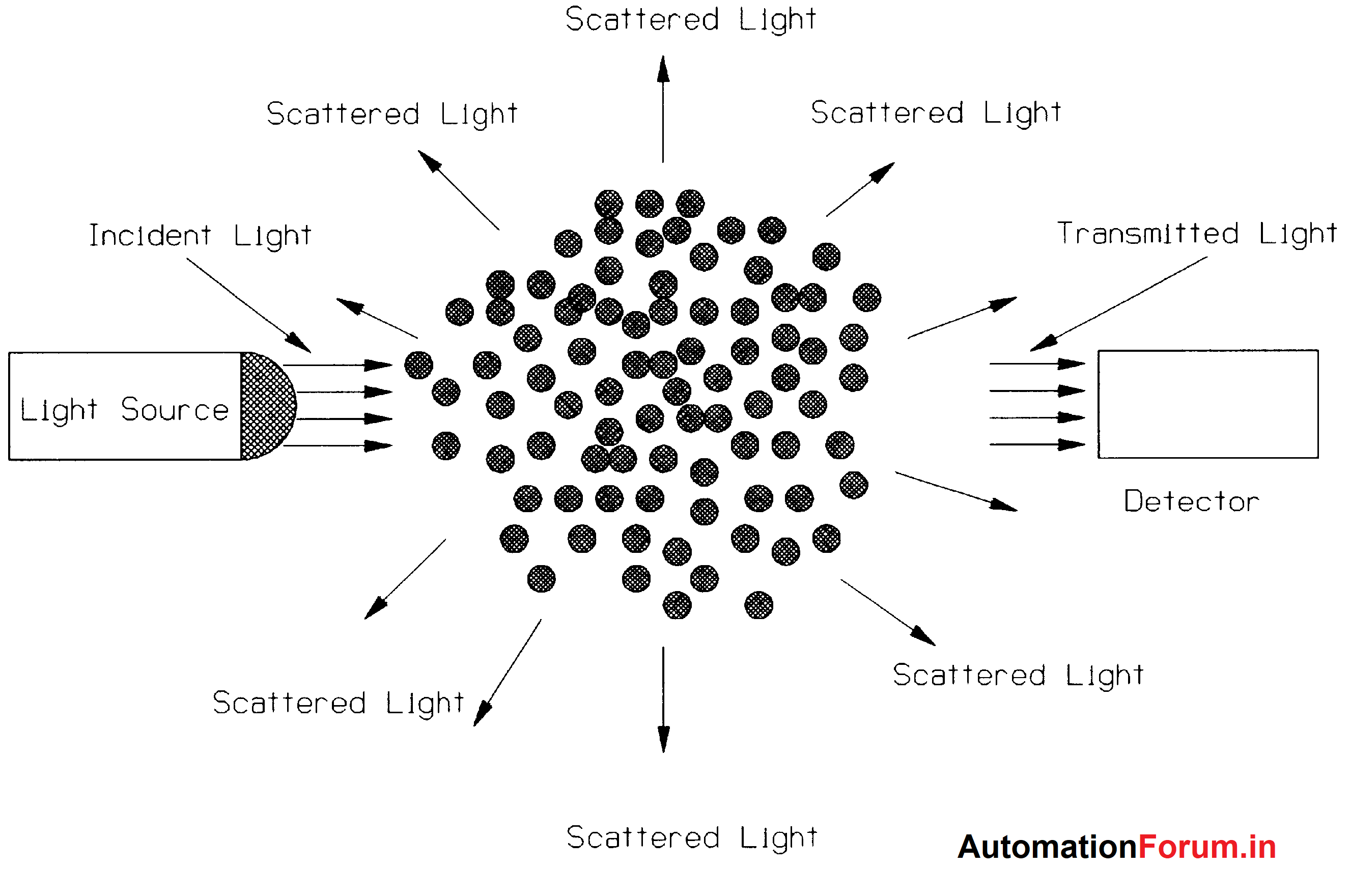 The turbidity of fluid is measured on the basis of reflection. In the absence of reflection losses, when a weak beam of light passes through a dielectric sample, the two processes most responsible for reducing the intensity of the transmitted beam are absorption and scattering.

Turbidity: Particles in a Nonabsorbing Medium

Suppose that electromagnetic radiation is incident upon a slab of the medium consisting of randomly positioned particles and that the transmitted radiation is detected as shown:

Assume that the source and detector are in the medium. The radiation that is received by the detector will be less than that incident on the slab because of the presence of the particles in the medium the particles have caused extinction (or attenuation) of the beam. The extinction of the radiation depends on two physical processes, scattering and absorption, whereas the turbidity depends only on scattering.

The basic optical design of a single-beam instrument is shown:

The light source is a low power (1 to 5 mW) vertically polarized He-Ne laser. It is important to use a polarized laser. The polarization direction of an unpolarized laser wanders, and this can lead to time-dependent reflection coefficients from the various surfaces in this instrument, and hence reduced performance. The beam passes through a laser intensity stabilizer. This device reduces long-term drift in the laser power to <= 0.1 percent, thus allowing single-beam operation.

To reduce any possible heating of the sample due to absorption, the beam is then passed through a neutral density filter, which attenuates the beam further to a level of 50 to 100 μW. The next item in the beam line depends on the detection scheme. For ac operation a light chopper is inserted into the beam line, while for dc detection nothing else is required before the sample.

The sample chamber then follows. This chamber requires an input and an output port and a design that precludes interference of any beam with other reflected beams. Other design details are determined by the materials to be studied and any required external factors that are to be controlled. After the beam has been transmitted through the sample, it passes through either a pinhole or a lens-pinhole combination.

This results in a small angle of acceptance for the detector which, in turn, reduces the scattered light at small angles from the transmitted beam that reaches the detector. A detector then completes the optical train. For most applications, a pin photodiode is an excellent, inexpensive detector; however, in some applications, other types of detectors may be superior.