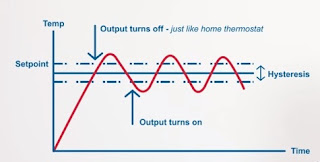 In the example, two-position control is the mode of control. The measured variable is the temperature of the process and the final control element is a steam valve.

The instruments used for two-position control are usually inexpensive, rugged and foolproof. In a process using two-position control, the value of the controlled variable will fluctuate around the set point. In the example of the steam heating process, the temperature repeatedly rises above and falls below the set point. Theoretically, the steam valve would have to open and close continually to maintain a constant temperature at the set point. This would cause too much wear and tear on the equipment.

Instead, two-position controllers usually have a dead-band or dead-zone. The dead band is a range of values around the set point. When the controlled variable is within this range, no control action takes place. The dead band reduces wear and tear on the equipment, particularly on the final control element without a dead band, the final control element would cycle continuously.