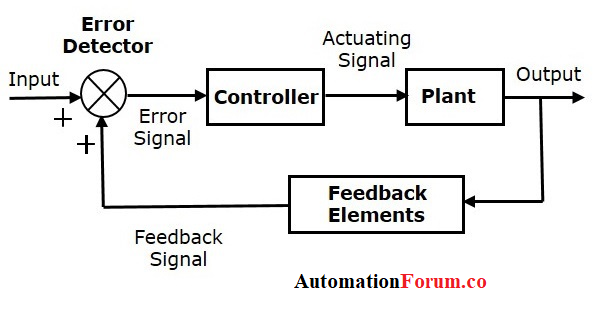 In the feedback, the output of the control system is measured and compared to the input reference signal. The deviation (error) between the two is used by the controller that will send the output so that the system error is zero.

A feedback system is one in which a sample of the output signal is taken and then sent to the input to form an error signal that drives the system.

In a Feedback System, all or part of the output signal either positive or negative is fed back to the input.

Feedback Systems process signals and as such are signal processors. The processing part of a feedback system may be electrical or electronic, ranging from a very simple to a highly complex circuits.

Why feedback control systems are used?

Positive feedback control of the op-amp is achieved by applying a small part of the output voltage signal at Vout back to the non-inverting ( + ) input terminal via the feedback resistor, RF.

In a negative feedback control system, the set point and output values are subtracted from each other since the feedback is out of phase with the original input. The effect of negative (or degenerative) feedback is to reduce the gain.

What is Well Head Control Panel?