In some processes, the fluctuations around the set point (called oscillation) may be too severe to achieve the desired results. Many processes require a more stable form of control. Proportional control is one way to achieve that stability 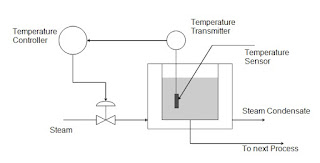 When proportional control is used in a system, the final control element may be in any position within its operating range. For example , a valve may be 75% open, not just 0% or 100% as with two-position control.


The word “proportional” refers to the fact that there is a continuous relationship between the value of the controlled variable, the deviation and the position of the final control element. This means that as the measured variable  moves away from the set point, the final control element gets adjusted proportionately by the controller to bring the measured variable back to the set point. Proportional control can be used to provide a greater degree of control action than two-position control.

With the proper control setting, proportional control can be used to maintain a balance between the input and output of a system.

Widening the proportional band width means that it will take more of an input change (more of a deviation from the set point) to give a full range of output (fully opened to fully closed). Or think of it this way : the measured variable has to deviate a large amount from the set point to produce a small change in the final control element.

With a very wide proportional band, the full range of input change moves the valve only slightly.  In effect, this would be similar to opening the valve halfway and leaving it in that position. The temperature is corrected very slowly over a long period of time.

Systems using proportional band control action often exhibit a condition referred to as Offset. After the oscillations have settled out in a process, there may be a difference between the actual value of the controlled variable and the set point. Offset is defined as a constant and steady deviation from the set point.
Offset is a major disadvantage of proportional control. The result is steady and consistent, but not exactly on target. Offset occurs when there is a change in the manipulated variable that cannot be detected by the controller. For example, due to wear and tear, the measurement of the speed of a pump supplying liquid to a blender is off by 5 rpms. The controller has no way of detecting or adjusting for this deviation. The set point remains the same; however, actual supply of liquid is off slightly.
previous post

What is an RTD ? How RTD works ? Advantages and Disadvantages of RTD?

What is a servo valve?