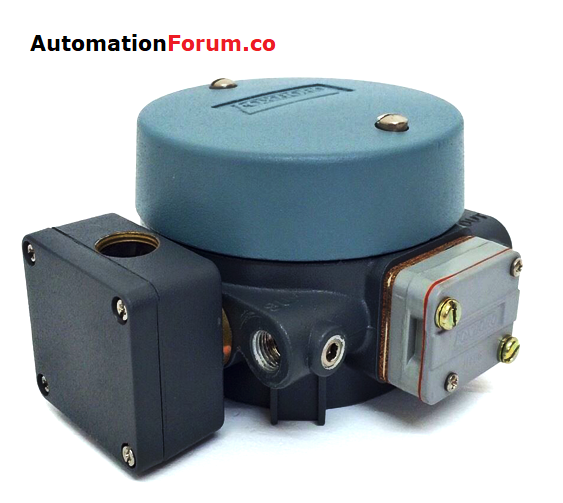 Electro-pneumatic is a pneumatic control system where air pressure and direction of the valve are controlled by an electrical current.

The system consists of a coil assembly mounted on cross-flexures allowing it to rotate relatively freely around its axis but avoiding any axial movement.

In a powerful magnetic field, the coil is suspended so that it is rotated by a current passing through the coil. In the case of the electro-pneumatic converter, a flapper/nozzle system senses this rotation.

The instrument’s pneumatic section consists of a feedback bellow and a bias spring applying a force to a lever pivoting at one end through a flexure and carrying a nozzle at the free end.

Working of the Electro Pneumatic converter:

The nozzle is supplied via a restrictor and its back pressure is applied to a pneumatic relay whose output is applied to the bellows of feedback and is also used as the unit’s pneumatic output.

An increase in the input current causes the coil to rotate, and in so doing moves the flapper towards the nozzle so that the back pressure is increased.

The relative position of the flapper and nozzle is adjusted with the current corresponding to the lower range value (e.g. 4 mA for a 4 to 20 mA converter) so that the pneumatic output pressure is equal to the required value (e.g. 20 kPa for a 20 to 100 kPa system).

The change is amplified by the relay and applied to the feedback bellows so that the lever moves the nozzle away from the flapper until a new balance position is achieved.